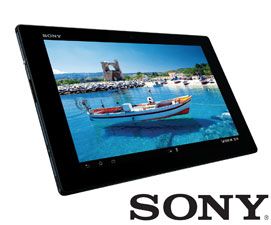 San Diego, CA—Sony’s new Xperia Tablet Z is a premium 10.1-inch Android tablet that is being touted as the world’s thinnest, at 6.9mm. Sporting the same OmniBalance design as the Xperia Z smartphone, the Xperia Tablet Z is also the first tablet to run on the Qualcomm Snapdragon S4 Pro asynchronous quad-core processor.

The tablet draws upon Sony’s camera expertise with an 8 megapixel HD rear camera featuring the Exmor R for Mobile image sensor and a 2MP HD front-facing camera for capturing images in any conditions, including low light. Also notable is the tablet’s level of water resistance, IP55 and IP57, making it immersible in up to three feet of water for up to 30 minutes.

“Xperia Tablet Z sets new standards in entertainment by matching premium specifications and Sony technology with cross-device connectivity and a consistent user-experience,” said Kaz Tajima, corporate vice president, head of UX creative design and planning, Sony Mobile Communications. “Xperia Tablet Z reinforces our intention to be a leading player in the premium Android device market, by building on the principles established by Xperia Z and perfectly optimizing them for the tablet form factor.”

The Z features a 10.1-inch Full HD Reality Display, powered by the Mobile Bravia 2 engine, to deliver enhanced color reproduction for a TV-like viewing experience. Sony states it offers the widest spectrum of color on any tablet. And Sony employed its S-Force Front Surround 3D technology to provide audio performance, while the company’s clear audio+ mode and two built-in speakers with four speaker halls on the left and right corners help the tablet deliver “amazing sound no matter how it is held.”

A Wi-Fi version of the Xperia Tablet Z includes connectivity options to help place it at the heart of the connected home experience. It includes Sony’s Near Field Communication (NFC) one-touch functions, which allow users to transfer content among compatible devices, including images, video and audio, from tablet to TV, tablet to speaker or phone to tablet, just by touching them together. The tablet’s universal IR remote allows users to control their TV and other Sony devices—as well as products from other manufacturers—directly from the tablet. Additionally, TV SideView is a new application, available from the Google Play store, that gives users a new way to interact with the TV: Discover content via the interactive and visual TV guide, change channels, share with social networks and cross-search other TV application listings, like Netflix, in a home network for additional content.

Also included is battery stamina mode, a battery management technology that can improve standby time, as well as a microSD card slot for up to 64GB of expandable storage.

The tablet will launch with a number of accessories, including a cradle, an LCD screen protector and a leather carrying cover that comes in black, white or red. Sony’s Xperia Tablet Z will come in black in 16GB and 32GB versions for $499 and $599, respectively, this spring. sony.com