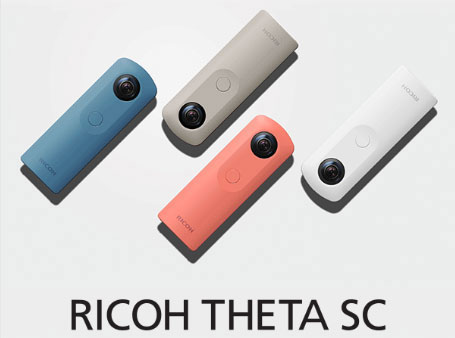 First introduced by Ricoh in 2013, Theta cameras are designed to enable consumers to record fully spherical images that show the entirety of a scene in photos or videos. The pocket-size Theta SC is the fourth-generation camera in the line, joining the top-of-the-line Theta S and entry-level Theta m15 cameras.

“Our goal is that the Theta SC will introduce more people to 360º spherical imaging,” said Kaz Eguchi, president, Ricoh Imaging Americas Corp. “With the growing popularity of immersive imagery, augmented and virtual reality, we wanted to produce a high-quality camera at an affordable price point that appeals to anyone who is interested in capturing and sharing the world around them in this new, exciting digital imaging format.”

Like its predecessors, the Theta SC sports a sleek design reminiscent of a TV remote. The camera can be handheld with one-button operation. In addition, it can be placed on a flat surface or tripod to be remotely controlled by a smartphone and the newly updated Theta S app.

The camera incorporates a high-performance CMOS image sensor and large-aperture dual lenses with an f/2.0 maximum aperture. It captures 14 megapixel stills and records Full HD (1,920×1,080) video clips up to five minutes in duration. A key feature of the series is an ultra-small, twin-lens folded-optical system. The system captures two wide-angle images and then marries them into a single spherical image.

Other features include an LED indicator on its front panel for at-a-glance confirmation of the mode, and a still-image/video switching button on its side. Additionally, the camera provides 8GB of internal memory for storage of approximately 1,600 still images (at L image size). It also offers a minimum start-up time lag of 1.5 seconds, a self-timer function and an interval shooting function.

Furthermore, when synchronized with a smartphone or tablet, the camera provides live-view display (still images only) on the device’s monitor. This allows users to check the outcome of various setting changes on the screen during shooting. The camera provides two display modes: full screen and panorama.

Along with its new camera, Ricoh also unveiled an updated Theta S app. The app is said to make “capturing, viewing, managing and sharing fully spherical imagery a snap.” It is available for iOS as well as Android devices. With the app, users can edit still images and export images for printing.

Ricoh also introduced the TH-2 hard case. The weather-resistant (IPX7), solid case is designed to house the Ricoh Theta SC, S, m1 and original model. The case also provides a tripod socket for attachment of various camera accessories.
The Ricoh Theta SC, which is lighter than the previous model, is available in four colors. These include beige, blue, pink as well as white. It has a suggested retail price of $299.95. ricohimaging.com