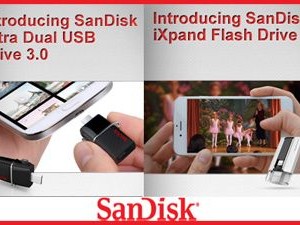 Milpitas, CA—SanDisk Corporation introduced two memory solutions to help consumers manage and transfer photos and video captured on their mobile devices to a Mac or PC computer: the Dual USB drive with a Type C connector, for use with Type C-ready connected devices; and the 128GB iXpand flash drive for iPhone and iPad.

According to a recent industry report from IDC, in 2015 people will capture and share an estimated 1.6 trillion images, and seven out of 10 of those will be captured on a mobile device. With this rising trend, users want to easily share and store their content across multiple devices and operating systems—in a seamless, intuitive and secure way.

“With the rapidly increasing amount of content captured on mobile devices, we know that consumers want easy ways to manage it all. In fact, our research shows that 82% of U.S. smartphone users find transferring of photos, videos, music and other files to be very important to them, and 67% would like new, easy ways of transferring those files,” said Dinesh Bahal, vice president, product marketing, SanDisk. “We are focused on delivering memory solutions designed to simplify the transfer process, while also providing expanded storage capacity so they can keep capturing and sharing great memories.”

Dual USB Drive with Type C Connector. Anticipating significant demand for devices with the Type C connector, SanDisk introduced its first-ever USB flash drive utilizing it. The new Dual USB drive has a Type C connector on one end and a USB 3.0 on the other, for fast transfer between next-generation devices and computers. It will initially be available in a 32GB capacity.

The Dual USB drive works with the SanDisk Memory Zone app, which gives users greater control over their mobile device’s memory storage. The app, available for free download from the Google Play store, is compatible with most Android devices and auto-launches once connected. It then enables users to locate, organize, transfer and back up data from their mobile device to the drive.

SanDisk’s 32GB Dual USB drive with Type C connector has a two-year warranty and will be available in Q2.

When used with the iPhone 6, iPhone 6 Plus, iPad Air 2 or iPad mini 3 128GB models, the drive instantly doubles the available storage for photos, videos, music and other multimedia files. Additionally, the iXpand drive enables playback of videos and music directly from the drive, including nonnative and PC-friendly file formats such as AVI, MKV and WMV67.

The iXpand Sync app, available on the App Store for iPhone and iPad, lets users automatically sync, back up and transfer photos and videos to the drive. It launches when the iXpand drive is plugged into an iPhone or iPad. The app also allows users to take advantage of Apple’s Touch ID fingerprint identity sensor on iPhone 6, iPhone 6 Plus, iPhone 5s, iPad Air 2 and iPad mini 3 running iOS 8, to encrypt and decrypt sensitive files on the drive, use popular apps to open files from the drive, and save content generated by these apps directly to the drive.