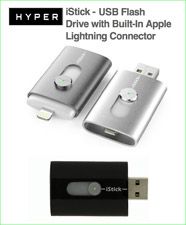 San Francisco, CA—Sanho Corporation, manufacturer of the Hyper line of mobile accessories—announced the successful launch of its Kickstarter campaign for iStick. iStick is a USB flash drive with both a USB connector and an Apple MFi-certified Lightning connector that plugs directly into recent iPhone, iPad and iPod touch models. Hyper products are distributed exclusively in the U.S. by OmegaBrandess Distribution.

iStick allows users to transfer photos, videos and other files between computers, iPhones, iPads and iPod touches without the need for synchronization, Internet, wireless networks or the cloud. Using its app, users can transfer files between the iStick and iDevices and also stream movies (even non-iOS native video formats), music and open files directly from the iStick without first copying them to the iOS device.

“We only reserve Kickstarter launches for our very best products, just like what we did with CloudFTP two years ago. In addition to crowdsourcing funds, we also want to crowdsource ideas and suggestions to make the product even better and to give it the biggest launch possible,” said Daniel Chin, founder and CEO of Hyper by Sanho Corporation.