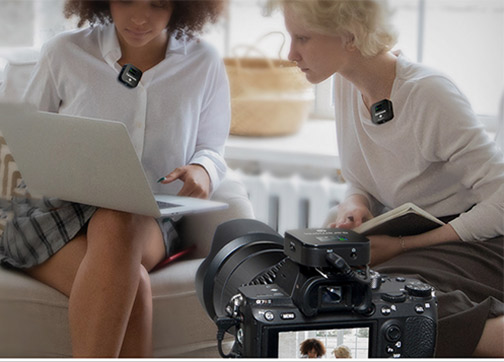 The Blink 900 B2 receiver comes with four output cables (TRS, TRRS, Lightning and USB-C) for use with nearly any camera or device. The transmitters and receiver also feature an LCD screen with automatic brightness.

Moreover, the transmitters have a high-quality built-in mic. Users can clip them to clothing or use them as a belt pack with the included DK3G lavaliers. They offer mic or line-level input; auto gain; as well as four-stage low–cut filters.

In addition, the system provides up to a 6-hour battery run time; a 656-foot range; and channel switching to avoid static and dropouts. Both the transmitters and receiver also charge in the included 4500mAh portable charging carry case. Furthermore, the case can charge the system up to three times on the go or while plugged into power and USB power banks.

The Saramonic Blink 900 B2 two-person mic system has a suggested retail price of $399.

Saramonic says they are for “demanding professionals with the sound quality, premium lavaliers, performance, range as well as power needed for professional applications, and that mini-2.4GHz wireless system just cannot match.”

The kits are solutions for vlogging, YouTube videos, capturing interviews, film dialog, field recording, broadcast TV and news gathering. In addition, they work with all types of cameras, recorders, mixers and interfaces with either 3.5mm or XLR microphone inputs.

Moreover, the micro belt pack transmitters are 25% smaller and 43% lighter than the standard UwMic9S transmitters. They also feature mic or line input; 9-step gain control; and up to 5-hour Li-ion power with USB charging/powering.

What’s more, the micro dual receiver is 13% smaller and 34% lighter than the standard UwMic9S receiver. It provides 3.5mm TRS as well as dual XLR output cables; headphone out; and up to 8–hour Li-ion power with USB charging/powering.

The kits also feature a 330-foot range with 360 ̊ antennas; auto-scan; infrared syncing; vivid OLEDs; as well as an impact-proof, watertight hard case. The UwMic9S Mini Kit 1 and Kit 2 each have an SRP of $329.