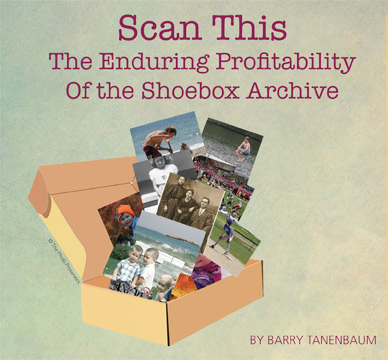 The demand isn’t always high, but it’s steady and profitable. It fits very well into the business model of dealers for whom the word photofinishing isn’t an anachronism.

It’s shoebox scanning, and it endures in the age of iPhones, social media postings and images that exist for an instant and then are gone forever.

The Print Connection
“As a profit center, it’s great,” is what I heard from Davis Hanson, general manager at Harold’s Photo Experts in Sioux Falls, South Dakota, where they do it all—prints, negs, slides, VHS transfers—but find prints the biggest draw. “We’ll make it a product of the month and offer 20% off,” Hanson said, “and that spurs business. And it doesn’t drop off as much as you’d think it would after the sale ends; it kind of goes year-round now.”

They’ve been doing it for 20 years and have come to call it “archiving” rather than shoebox services. They do it all in-house and sell the services as Christmas gifts if customers want to preplan. Promotion takes the form of brochures in the store that explain everything, plus information at the website.

Best of all, the sale doesn’t end with scanning. “There’s a definite synergy with making prints after they’ve had scans made,” Hanson said. “Or they’ll come in with the DVD and throw it on a kiosk and make prints.”

The lion’s share of the demographic for archiving is middle-age to older customers. “But sometimes the kids bring in pictures. It’s their childhood memories, and it’s important for them to get them digitized, sometimes more important than it is to their parents. The parents would just as soon sit and look at the prints, but the kids want them all digitized for future generations so they can look at them on their computer screens and their Apple TVs. When it’s older people, they’re often doing it for Christmas gifts or and giving out the DVDs to kids and grandkids.”

Efficiency of Effort
When I spoke with Rex Allen, one of the owner’s of The Imaging Depot and Allen’s Camera in Utah, the first thing he said about shoebox or bulk scanning was, “We use it as a labor efficiency tool.” Which means that he offers a nicely reduced price if folks don’t care how long it takes to get it done.

“People who bring me a lot of stuff will get a better price,” he said, “but they’ll get half off the better price if they’re not in a hurry. I tell them we only do those [half-price] orders when we have nothing that’s needing to be done elsewhere. I say, ‘If you have a required due date, you can’t take advantage of the special price.’”

There was an order that literally took a year-and-a-half to do, but that’s not the norm. “It was like ten thousand 110 negatives,” Allen said, “and we did it when there was nothing else to do. So it made me money rather than my employees sitting around making me none.”

The great price/slow scanning deal has been terrific for him, and his customers are happy to save half the normal fee.

“If they need it done in two weeks, it’s the regular fee,” Allen said. “We almost always get a comment along the lines of, ‘Well, these have been in the shoebox for 10 years, so we can wait a little while longer while they get done.’”

For Allen, there’s always work waiting. “I have a lab employee who, when there’s nothing to do, scans slides. I’ve never been caught up in the last two years. I’ve always had slides to scan in the bulk scanning pile. Right now, I’m looking at 12 boxes full of stuff, probably mostly slides, that we won’t be touching until after Christmas.”

Like the other dealers I talked to, Allen finds most of his customers are in the 40 to 50 age group. “Most are people for whom it’s not even their stuff; they’re doing their parents’ photos. A lot of times their parents have passed away, and they found boxes of stuff. Or their parents are getting old, and they don’t want to do this later, so they’re taking care of it now.”

Holding Steady
The annual volume doesn’t change much at Dodd Camera in Cleveland, Ohio, but CFO Adam Carreras pointed out there are seasonal ups and downs.

“This time of year, with the holidays, we get a lot of big orders for video transfers,” he said. “Somebody went to a holiday party and saw old tapes transferred to DVD and asked, ‘Where did you have that done?’ And it’s, ‘Oh, Dodd Camera did it.’”

It seems that at Dodd, the shoebox business pretty much drives itself. Dodd’s website highlights the store’s services, often with a banner ad, but, Carreras said, “It’s better for us to use our TV marketing dollars to push a product. We’ve been around so long that a lot of our customers know that we do scans and transfers, so they think of us a lot.”

The holidays are a time when much of that thinking takes place and the scanning and transfer business picks up and balances out the year.

“Parents who have children in their teens are going through the nostalgia of the holidays and remembering their childhoods,” Carreras said. “Then you have older people who are sorting out their lives and remembering everything, and they collect all their reels and stuff and do it all at once.”

Dodd does VHS transfers and print, neg and slide scanning in-house. Eight millimeter and Super 8 film is outsourced to a local service company.

“We also sell scanners,” Carreras added. “We’ve done pretty well with those.” Selling scanners doesn’t seem to cut into the selling of scanning services. In fact, when I used the word “shoebox,” Carreras corrected me: “A lot of times what people will bring in is more like a moving box.”

Looking Ahead
There will be an end to transfer, to the shoebox era. Someday all the slides, prints, negatives, and reels of 8 and Super 8 film will have either been transferred or thrown away. Anyone who wanted to digitize will have done so, and every image deemed worthy will have become ones and zeros.

One dealer I spoke to has apparently been thinking about this. “We’re trying to change the habit of the children of today, to get them to print pictures,” said Stephen Weiss, president and CEO of Creve Coeur Camera in St. Louis, Missouri.

“Our newest offering comes out after Black Friday: when you buy a camera, you get 1,200 free prints, a hundred a month for a year. We don’t care where [the images] come from—a phone or wherever—we want them to print prints so they have them.”

Weiss figures that “If they do it this year, they’ll do it next year,” and maybe they’ll keep on doing it. “I just want them to have prints, and we figured it’s a win-win for us. To get a customer back in the store costs us six dollars a month; it’s nothing. They can do everything but instant prints; they can do them at the kiosk or over the counter.” The important thing, he suggests, is that they get into the print habit and start to appreciate and value prints.

Meantime, he’s doing well with shoebox scans, charging $99 to scan up to 500 prints of sizes up to 8×10 inches. It’s all done in-house “unless we get swamped.”

Creve Coeur’s been doing shoebox scans for about 10 years, but they’ve been offering video transfer and high-res and multiple scans from day one, 17 years ago, when they became something of a lab for people needing digital services.