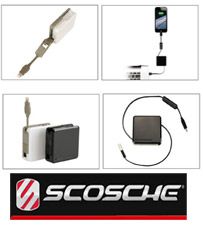 Oxnard, CA—Scosche announced the availability of smartBox, a 2-in-1 retractable charge & sync cable for Lightning and Micro USB powered devices. Compact and portable, the smartBox is designed to keep digital cameras, smartphones and tablets fueled while on the go.

The cable conveniently extends up to three feet, and a sliding adapter allows users to switch between Lightning and Micro USB devices. smartBox is retracted by pulling on both ends, and the charging adapter is magnetically held in place when closed. A slim barrel design lets users plug either connector into their phone without having to remove a case.

“When I’m headed out, the last thing on my mind are the cables I need to charge my mobile devices,” said Kas Alves, executive vice president, Scosche Industries. “With smartBox, I only need to remember one cable and I can plug in my tablet, phone, camera, boomBottle and more while on the road. Just throw it in your pocket, backpack or purse, and you’re good to go.”