Raleigh, NC—Exposure Software, formerly known as Alien Skin Software, released its Exposure X6 image-editing software for Mac and Windows. It is the company’s newest version of their RAW photo editor for creative photographers.

Exposure is a stand-alone image editor that handles a full photography workflow. It also includes plug-in support that enables Exposure’s editing and creative effects in Adobe Photoshop or Lightroom.

New in Exposure X6 is advanced GPU optimization, which speeds up image processing. GPU support works in concert with Exposure’s existing multi-core optimization to leverage the full power of modern computer hardware. Many frequently used editing operations were also sped up by a factor of three on typical GPU hardware. Consequently, the upgraded performance permits editing at improved speeds.

Moreover, the program’s new automatic adjustments select optimized values for most frequently used controls in one click. Users can also apply them in batch to ease the time spent editing large photo shoots.

In addition, auto–exposure adjustment sets image exposure for under and overexposed images. Auto haze level changes the level of atmospheric haze present in the image. This is particularly useful for backlit subjects and images shot into the sun.

Other automatic adjustments include auto dynamic contrast, which lowers and raises the contrast without changing saturation or hue; and auto tone, which sets values for blacks, shadows, highlights as well as whites sliders that affect tone. 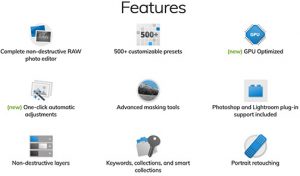 Another new feature is an advanced color editor that builds on Exposure’s 3D color masking for greater control of color modifications. For example, photographers can change a model’s blue dress to red in a few clicks. They can also select source and target colors based on luminance, hue and saturation. It’s even possible to select multiple color replacement mappings and save them as a preset.

Other enhancements include a new haze level slider for counteracting the decrease in contrast caused by atmospheric haze or adding haze as a creative effect; customization of the hue and opacity of the selection mask overlay; an optional black background for the mask to view selected pixels without distraction; and also an optional luminance or saturation background for the selection mask. The later helps visualize the mask region when adjusting luminance or saturation constraints.

Exposure X6 is available now for $119. Owners of previous versions of Exposure software can buy it for the upgrade price of $89. Additionally, anyone who purchased Exposure X5 on or after July 15, 2020 will automatically receive a free upgrade to Exposure X6.

A 30-day full–featured free trial of Exposure is available here.