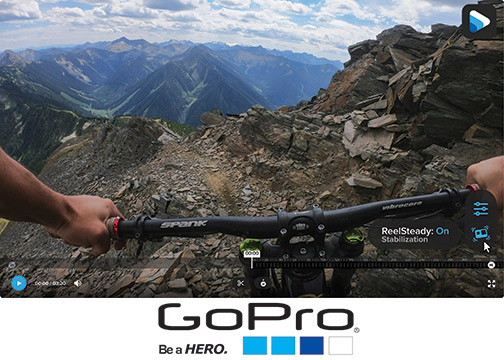 “GoPro Player + ReelSteady delivers the tools some of our most creative customers—like FPV and 360 enthusiasts—need to quickly and seamlessly do what they do best: create mind-melting content,” said Nicholas Woodman, GoPro founder and CEO.

“GoPro is committed to developing a robust desktop product experience. And bringing the power of ReelSteady advanced video stabilization to the GoPro Player desktop app is a natural next step to super-serve our most passionate content creators.

The app brings the power of ReelSteady’s Emmy Award-winning stabilization to GoPro Player’s arsenal of 360º-focused tools. It transforms 360º GoPro Max footage into traditional videos; it also plays and exports most multimedia formats.

Traditional and 360º video creators can expect a seamless transformation of their content. And that’s whether applying ReelSteady stabilization to shaky FPV video or reframing and exporting 360º Max footage to share on social media.

The app features the new ReelSteady stabilization tool with real-time playback. It creates GoPro’s smoothest footage ever. In addition, users can view the full-quality stabilized shot as soon as the video loads. In addition,  ReelSteady is now compatible with most shooting modes, including HyperSmooth.

Another new premium feature is lens correction. The app can remove wide-angle lens curvature using ReelSteady Stabilization to polish videos. It will also trim with frame-by-frame accuracy to keep only the parts users want in the videos.

Also new is a batch export tool. It queues hundreds of files to save time and energy by letting batch export do the rest. In addition, it now offers the ability to save presets and apply different settings to each export.

Finally, users can view a variety of video and photo formats right in the player. They can then export .mp4 files compatible with postproduction software or share them directly to social media.