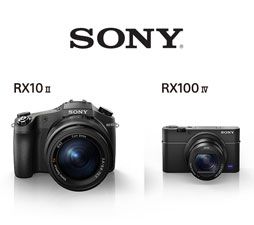 The most advanced Cyber-shot point-and-shot cameras to come to market, both models employ a 1.0-type stacked Exmor RS CMOS sensor with advanced, high-speed signal processing and an attached DRAM memory chip. The combination is said to result in more than five times faster readout of image data.

As a result, the pair can capture 40x super slow motion video at up to 960 frames per sec for enhanced clarity and detail—a first for Sony consumer cameras. Their fast processing capability is also said to result in continuous speeds of up to 16 fps on the RX100 IV and 14 fps on the RX10 II for an extended period of time. In addition, their anti-distortion shutter boasts a maximum speed of 1/32,000 second.

“Utilizing Sony’s decades of expertise in digital imaging, we’ve made it possible for everyday customers to enjoy a professional imaging experience with the new RX100 IV and RX10 II cameras. With the power of the world’s first 1.0-type stacked CMOS sensor packed into a compact, portable body, these new cameras bring the excitement and creativity of high frame rate shooting, 4K recording and a variety of other pro-quality features to a whole new audience,” said Kimio Maki, senior general manager of the Digital Imaging Business Group for Sony Corporation.

Kelly Davis, vice president of Digital Imaging for Sony North America, added “The new RX100 IV and RX10 II models make a strong statement for Sony, as they break through all existing boundaries of compact cameras and will allow professionals, hobbyists and enthusiasts to capture images and video that they never before thought were possible.”

Pro-level video options include Picture Profile, S-Log2/S-Gamut and the choice of 960-fps, 480-fps and 240-fps rates and 60p, 30p and 24p playback formats to fit the speed of the moving subject. A movie record button acts as a start/end trigger to begin and stop recording. The “end trigger” mode lets shooting begin 2–4 seconds before the movie button is pressed (two seconds of movie footage shot at 960 fps and 24p would take about 80 seconds to play back).

These are also the first Cyber-shots to offer 4K (QFHD 3,840×2,160) movie recording in the XAVC S codec. The cameras utilize full pixel readout without pixel binning to help ensure the finer details of 4K video are captured with minimal moiré and jaggies. The capacity for shooting 4K differs on the two cameras, as the more professionally styled RX10 II can shoot 4K video for up to 29 minutes, while the more casual RX100 IV shoots 4K clips at up to 5 minutes in length.

Both cameras also have dual video-recording functionality, enabling shooters to capture 16.8 megapixel still images during 4K video recording in any of 11 composition patterns.