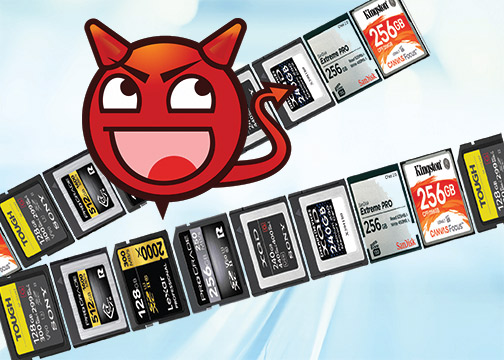 Many of the astonishing performance parameters built into today’s high-end digital cameras were made possible by rapid advances in sensor technology and image-processing software. These sophisticated pro/enthusiast crossover cameras now capture blazing full-res bursts and 4K DCI and UHD video at fast framing rates. However, to do that efficiently, it’s essential they work with flash memory cards that can keep pace.

That’s why the leading memory card makers have unleashed a new generation of SDXC, CF and XQD cards that deliver data throughput rates unimaginable even a few years ago. We’re pleased to say that all 10 memory cards detailed here meet or exceed the requirements of today’s serious shooters. These cards enable them to effectively use the latest ultrahigh-res full-frame DSLR and mirrorless cameras; shoot pro-caliber 4K video as well as rapid-action sequences; and save them as large files.

Savvy retailers that actively promote these and other high-performance memory cards to all of their customers will see greater customer satisfaction and loyalty—all while bolstering their bottom line.

Card capacity is pretty straightforward; the greater the number of gigabytes (GB) on the label, the greater the storage capacity. For most shooters, a 64GB card is sufficient. However, pros and enthusiasts who shoot 4K video or extended-action sequences at 10 frames per sec should opt for a 128GB, 256GB or even a higher capacity.

Card speeds are a bit more complicated; several rating systems are simultaneously in use. There are three kinds of speed classes: Speed Class, UHS Speed Class and Video Speed Class.

The UHS Speed Class rating is the most useful. A UHS-I card (marked I) supports read (transfer) speeds up to 104MB/s(econd); a UHS II card supports a read speed of up to 312MB/s. In addition, the latest UHS-III cards support up to 624MB/s. UHS-II cards also have a second row of electrical contacts to help boost speed. If a camera or card reader doesn’t have the second row of contacts, its effective speed is similar to that of a UHS-I card. In any case, a card’s UHS classification is a good barometer of the card’s maximum burst speed.

In the older Speed Class 1–10 rating system still on some cards, a top-tier Class 10 card (10 in circle logo) is equivalent to UHS-I; it’s verified to write no slower than 10MB/s. Moreover, a Class 4 card has a minimum write speed of 4MB/s; OK for shooting single frames but not great for capturing high-res videos and bursts.

All about Those Letters

Most of today’s top-tier SD (Secure Digital) cards are SDXC (Xtended Capacity); this file format covers capacities ranging from 32GB to 2TB. SDHC (High Capacity) cards that range from 2GB to 32GB are still available, and all current cameras that take SD cards are compatible with both types.

Furthermore, the newest high-end CF (CompactFlash) cards for pro-caliber cameras are marked CFast 2.0. This classification corresponds to a blazing read speed of 560MB/s as well as an impressive write speed of 495MB/s. The formidable Nikon D5 is available in either dual CF or dual XQD card slot configurations.

XQD cards, originally designed as a replacement for the larger CF cards they resemble, provide much faster data transfer rates along with higher capacities—over 2TB. They use the PCI Express data transfer interface, and they’re optimized for use in ultrahigh-res cameras and high-definition camcorders. However, they’re not backward compatible with CF or CFast cards and only work in cameras with XQD slots.

The latest CFexpress cards provide read speeds up to 1600MB/s and write speeds up to 600MB/s; they are also compatible with the CompactFlash Association 2.0 specification and are backward compatible with select XQD cameras. It’s noteworthy that Canon’s remarkable new flagship Canon EOS 1D X Mark III has dual CFexpress card slots. In addition, the Nikon Z 7, Z 6 and D500 have slots for XQD cards, as do some Sony high-end pro-caliber video cameras.

Yes, SDXC cards (in full size and micro versions, with and without adapters) are by far the most popular memory cards worldwide. Moreover, since most mirrorless cameras use them, they will likely continue to dominate the market. But CFast, XQD and CFexpress cards are now definitely contenders in the high-performance memory card arena and are excellent choices for those who shoot with the high-spec cameras that accept them.

Optimized for 4K video recording, this UHS-II, U3, Class 10 card provides a maximum read speed of up to 300MB/s; a maximum write speed of 260MB/s; and a minimum write speed of 30MB/s. For pro photographers and videographers, the SanDisk card is also shock and water resistant; X-ray proof; and withstands temperatures of -13ºF to 185°F.

Moreover, it includes a downloadable copy of RescuePro Deluxe software to retrieve any data that is compromised or accidentally deleted. $199.99.

Acclaimed for its robust design that omits the built-in write protect switch to enhance ruggedness, this UHS-II, V90, U3, Class 10 card also delivers impressive performance. This Sony memory card achieves a maximum read speed of 300MB/s as well as a maximum write speed of 299MB/s.

This Lexar card is designed for such applications as capturing high-speed imagery and Full HD 1080p, 3D and 4K video with a DSLR, HD camcorder or 3D camera. The SDXC UHS-II Class 10 card (2000x in the old speed rating system) provides a maximum read speed of 300MB/s and a maximum write speed of 260MB/s.

Additionally, its distinctive red color makes it easy to spot. The performance of this rugged UHS-II Class 3 card (U3) card is equally impressive; it has a read speed of 300MB/s and a write speed of 260MB/s. What’s more, its V90 video speed rating makes it suitable for high throughput video and still applications, including high-speed, high-res bursts. Its temperature operating range is also an impressive -13º–185ºF. It’s also UHS-1 backward compatible. $219.95.

This Delkin XQD card is targeted at professional photographers as well as videographers using high-end Nikon and Sony cameras with XQD slots. The card features a second-generation PCI Express interface. Moreover, it boasts a maximum read speed of 440MB/s and a maximum write speed of 400MB/s.

This card is a terrific option for professional shooters who want to upgrade the performance of their CFast 2.0-compatible DSLRs. The SanDisk card uses a SATA III 6GB/s bus to deliver a sizzling maximum read speed of 525MB/s as well as a maximum write speed of 450MB/s.

It also has an impressive video performance guarantee of 130MB/s (VPG 130). It can record cinema-quality DCI 4K video and was tested to work reliably in extreme temperatures. In addition, the card comes with a RescuePro Deluxe recovery software download offer. $399.99.

Aimed at pro-level still image and 4K video shooters, this robust Sony card provides a PCIe 2.0 interface. As a result, it achieves read speeds up to 440MB/s and write speeds up to an impressive 400MB/s. This permits the capture of up to 200 RAW burst still images as well as 4K video in all formats. Moreover, its outer shell can withstand temperatures of -13ºF to 149°F.

It is also resistant to UV exposure and can survive a drop of up to 16.4 feet without damage. In addition, recessed contact pins protect them from damage, dust and electrostatic shock. The card also comes with free File Rescue software to recover compromised content, including RAW images, MOV files and 4K XAVC-S video files. $379.99.

This ProGrade Digital card is optimized for high-end video capture with the latest pro-caliber crossover DSLRs, mirrorless and video cameras. The rugged CFexpress card provides read speeds up to an incredible 1600MB/s and write speeds up to 1000MB/s. In addition, since the card is guaranteed not to drop below a minimum sustained write speed of 500MB/s, it allows uninterrupted, cinematic capture of RAW 4K or 6K video.

Furthermore, it’s resistant to extreme temperatures as well as shock, vibrations and X-ray exposure. It is also backward compatible with select XQD cameras with firmware support. Its metal encasement and built-in thermal throttling protect it from overheating. Also, its Refresh Pro enables the refreshment of the card’s performance and the monitoring of card status. $549.99.

This Class 10, U3, V60 microSDXC card from Delkin is designed for high-performance compact digital cameras and action cameras or any digital camera that accepts SDXC cards (with adapter). Its UHS-II bus supports maximum read speeds up to 300MB/s and maximum write speeds up to 100MB/s.

In addition, it is guaranteed to provide a minimum write speed of 60MB/s, which is sufficient for reliable continuous 8K, 360° and high-speed video recording. It also features built-in error correction and comes with a UHS-II microSD-to-SD adapter. Moreover, it is protected against water, shock and X-rays. $129.99.

The Kingston Canvas Focus CF card is ideal for content creators who use DSLRs or other CF-enabled cameras. Its UDMA 7 support enables a maximum read speed of up to 150MB/s as well as a maximum write speed of up to 130MB/s. As a result, it allows the capture of cinema-quality 4K video and Full HD 1080p video, as well as continuous bursts of RAW and JPEG photos.

The card also offers a video performance guarantee rating of VPG 65 for professional-quality video capture. In addition, it’s rated to operate in temperatures ranging from -20ºF to 85ºF. $115.99.