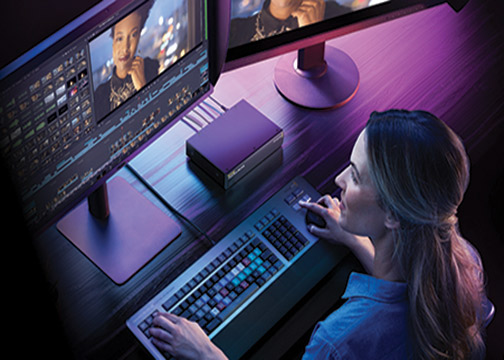 “Unlike cheap storage products from office supply stores, Blackmagic Cloud Store Mini is much faster and is designed for the film and television industry. It even has the HDMI monitoring output for a live status of the memory core!”

The new network storage solution has a high performance of four M.2 flash memory in a RAID 0 configuration. With its built-in 10G Ethernet, the Cloud Store Mini allows multiple users to collaborate on video editing in software such as DaVinci Resolve. Plus, with Dropbox sync, multiple units are synchronized across different geographic locations.

A private network storage solution for any use, it’s also an option when large media files need to be shared between multiple users for editing, color correction, audio post and VFX work. It even handles 12K Blackmagic RAW digital cinema files. Each user gets zero latency and they don’t need to store files on their local computer.

Moreover, the device is available with 8TB of flash memory. M.2 flash memory cards are used for reliability, high-access speeds and zero seek times. Notably, the four M.2 cards are arranged in a parallel RAID 0 group so they operate faster than a single card. That ensures enough speed to keep up with the 10G Ethernet connection.

What’s more, the internal memory core was designed to saturate the 10G Ethernet port to its theoretical maximum speed, even with multiple users connected. However, even at maximum speed, the device is quiet, with little cooling fan noise.

Furthermore, users can setup a local cache of their Dropbox files. This makes working much faster because files are instantly available without having to downloaded them from the Internet. Users can also sync multiple Blackmagic Cloud Store Minis via Dropbox. As a result, people in different geographic locations can collaborate without latency, because everyone has a local copy of the files.

The device’s HDMI monitoring output allows users to connect a TV or computer monitor to get a live status of its operation. A storage map shows a graphic representation of the memory core and real-time read and write access for connected users. There are also graphs that show customers the data transfers on the Ethernet connections. The status for each Dropbox connection is also shown.

The device also has a built-in USB-C to Ethernet adapter that is accessed by plugging a computer into the USB-C port on the store. Once users have connected the Cloud Store Mini’s USB-C connection to a computer, they have an Ethernet connection to the store. Subsequently, they can plug in to quickly grab files when needed. In addition, users can utilize its USB-C ports for file backup by connecting a disk.

The Blackmagic Cloud Store Mini provides private storage with no subscriptions and no tracking of usage or data. Moreover, users don’t even need to log into a web page to maintain storage settings; that’s because the device uses a free-to-download software utility for Mac and Windows. As a result, users can run a private network, totally disconnected from the internet.

The Blackmagic Cloud Store Mini has suggested retail price of $2,995.