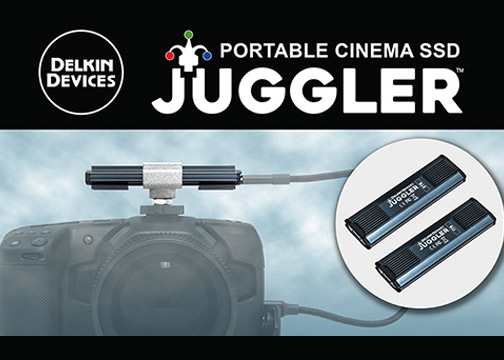 Poway, CA—Delkin Devices, a manufacturer of flash storage solutions and camera accessories, announced the newest addition to its line of products for the professional video market. The Delkin Juggler is a USB 3.1 Gen 2 Type-C portable cinema SSD.

It is specifically for use with today’s USB-C supported professional video cameras, including the Blackmagic Design 4K Pocket Cinema camera. Delkin says the Juggler “is faster than any other storage on the market.”

With a removable USB-C cable, the SSD boasts write speeds up to an amazing 1000MB/s. Moreover, the Juggler works with a variety of USB-C supported cameras, providing safe recording and longer recording times.

In addition, the Juggler includes a mounting clip with a built-in ¼-20″ male thread for direct camera attachment. As a result, no cage is necessary.

Furthermore, the SSD offers plug-and-play editing. Once filming is finished, cinematographers can use the drive to edit directly off of (1050MB/s transfer). This streamlines workflow as well as avoids the need to transfer files from multiple cards.

The Delkin Juggler comes in 1TB (terabyte) and 2TB capacities; it retails for $299.99 and $499.99, respectively. In addition, it is backed by Delkin’s 48HR Replacement Guarantee; Delkin will replace any nonworking unit within 48 hours or less, prior to receiving the nonworking SSD.

The company’s consumer group manufactures storage devices as well as digital accessories for the photography market. Delkin Devices has operated since 1986. In addition, it has offices located in both the United States and Europe.