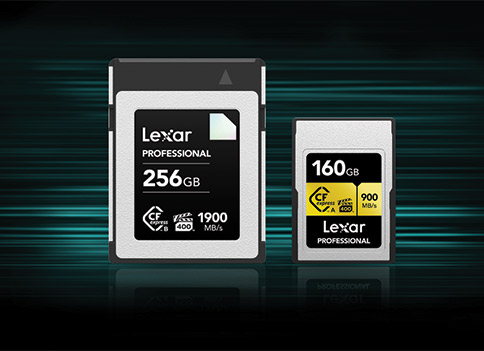 “These cards will dramatically help professionals speed up their workflow while providing the quality, performance and reliability they’ve come to expect from Lexar,” said Joel Boquiren, general manager, Lexar.

To meet the demand for high-performance memory solutions by professional filmmakers and content creators, the new CFexpress Diamond Type B series provides read speeds of up to 1900MB/s. Consequently, the cards can dramatically accelerate a postproduction workflow. Moreover, they provide write speeds of up to 1700MB/s. Subsequently, they enable the quick capture of smooth RAW 8K, 6K and 4K video. The cards are also backward compatible with select XQD cameras.

These cards feature speeds of 900MB/s read and 800MB/s write. As a result, users can capture high-quality images as well as 8K, 6K and 4K video.

Lexar will also launch the CFexpress Type A reader in the coming months. It will support ultrahigh-speed USB 10Gbps transfer protocol via USB Type-C.

Moreover, the new cards are durable and can operate in the harshest of conditions. They are shock– and vibration-proof and can also operate in extreme temperatures (14ºF to 158ºF). What’s more, for added peace of mind, both cards are backed by a lifetime limited warranty.