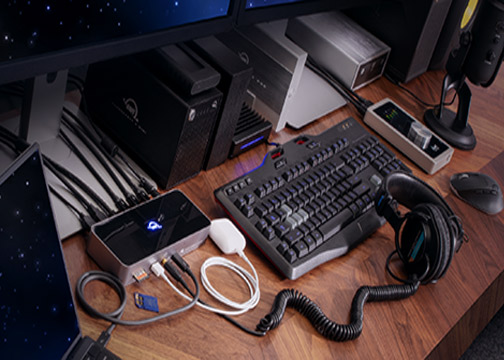 “Being a leader in Thunderbolt integration and accessories, OWC is excited to offer the Thunderbolt Dock,” said Larry O’Connor, CEO/founder of OWC. “These new solutions will give users, especially on the Mac side, what they have been asking for . . . the ability to expand upon the number of Thunderbolt devices they can add to their machines and create new workflows to optimize their workflows better.”

With the OWC Thunderbolt Dock users can have four Thunderbolt ports, plus four USB ports, as well as a port for an SD card, Gigabit Ethernet and a combo audio in/out. They gain access to all their Thunderbolt and USB devices through a single cable to a Mac/PC.

Furthermore, utilizing the latest Thunderbolt technology, the dock enables users with Intel 11th Gen Core and Evo PCs with Thunderbolt 4 as well as existing or M1–based Macs to add a mix of ports. In addition, Thunderbolt 4–based docks will continue to work with Thunderbolt 3 solutions such as storage and adapters.

The dock adds four fully functional Thunderbolt 4 ports to a computer. All Thunderbolt ports also support USB devices and monitors. In addition, reimagining the daisy chain, users can create three separate device chains. As a result, they can remove devices from one chain without affecting or disconnecting the others. They can also add three Thunderbolt bus-powered devices. In addition, they can plug headphones and mics into the audio combo jack.

Another feature is that the device offers charging capabilities. The Thunderbolt 4 host port keeps a notebook charged  with 90W power delivery. Users can also connect and charge devices through the four USB ports.

What’s more users can manage additional devices. They can connect more storage; up to two 4K displays or one 5K/6K/8K display; or other accessories. The dock additionally enables more reliable sharing and streaming via Gigabit Ethernet. It  eliminates patchy Wi-Fi—ideal for IP-based workflows and secured networks .

Other features include an adjustable LED and built-in security. It includes a  Kensington Security Slot as well as a Nano Security Slot for anti-theft cabling.

The OWC Thunderbolt 4 Dock, available now, has a suggested retail price of $249.