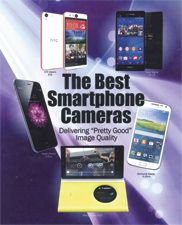 We are in the midst of a photo-taking golden age. More photos have been snapped in the last several years than in all the previous years of picture-taking combined. More precisely, nearly a trillion images are likely to be captured this year, compared to less than 57 billion taken in 1994, the year the first consumer digital camera went on sale.

Unfortunately for digital camera makers, only a small percent of today’s digital photos are shot by their wares. According to CIPA (Japan’s Camera & Imaging Products Association), worldwide shipments of digital cameras will drop another 19.6% this year to around 55 million units. Conversely, Gartner says more than 1.2 billion smartphones will be sold this year, nearly all sporting digital imagers of at least 8 megapixels.

But as movie snobs well know, popularity is not necessarily a sign of quality.

A huge number of these billions of digital snaps are low-resolution (2MP on average) selfies. The phenomena was certified by Oxford, who in 2013 named it the term word of the year, adding it to their dictionary after a 17,000% increase in its vernacular usage from the previous year.

And despite the ever-increasing resolution of the imagers on the rear of the latest Android flagship smartphones to more than 20MP, cameraphones continue to be crippled by pinhole optics and poor low-light results. Digital camera makers are exploiting these smartphone camera weaknesses by marketing higher priced interchangeable-lens mirrorless models and fixed-lens, bridge cameras with long zoom lenses.

But for most amateur shutterbugs, smartphones provide the dreaded “good enough” results, especially if “good enough” means not having to carry multiple devices. Even with their pinhole optics and low-light deficiencies, the smartphone and, to a lesser extent, the tablet, have clearly replaced the entry-level digital camera and camcorder for a vast majority of the picture-taking humans in a vast majority of image capture situations.

Take higher resolution, for instance. The latest models from Sony, Motorola and Nokia now all sport 20MP+ sensors. Backside illuminated sensors are getting larger and larger, topped off by the 1/2.3-inch chips on the Sony Xperia Z3 and the Samsung Galaxy K cameras, and apertures have risen to f/2.4. And nearly all flagship models from all makers, including Apple’s iPhone 6 Plus, now include optical image stabilization and auto HDR.

These and other improvements are shrinking the gap between the smartphone and stand-alone digital camera, raising “good enough” to “pretty good.”

Claim to Camera Fame: What Apple calls “focus pixels”—aka on-sensor phase detection—enables the iPhone 6 Plus to autofocus twice as fast as the iPhone 5s

This latest iPhone is the winner and still smartphone camera champion, the camera di tutti camera of smartphone picture snappers. Even though Apple has stuck with its comparatively archaic 8MP resolution and f/2.2, five-element lens from the iPhone 5s, the 6 Plus’s 1/3-inch sensor, large 1.5-micron pixels, optical image stabilization, multi-shot HDR and aforementioned on-sensor autofocus enable Apple’s thin phablet to capture nearly blur-free shots in low light in addition to its already excellent daylight results. Apple also has added a super 240-fps slo-mo setting to its existing 120-fps slow speed and a new time-lapse function. And, to compensate for its lower-than-most standard resolution, there’s a 43MP panorama mode, improving what is already considered the best and easiest to use smartphone panorama on what is still considered the best overall smartphone camera. apple.com

Available only in an unlocked GSM version in the U.S., the Galaxy K zoom is the closest thing to a “real” digital camera currently available in a smartphone. Equipped with Samsung’s hexa-core 1.3 GHz quad core/1.7 GHz quad core Exynos 526 processor, the K provides 20.7MP resolution via a BSI 1/2.3-inch CMOS sensor. It features dual Xenon and LED flashes, optical image stabilization, manual and autofocus and pinch-to-zoom. The K is also helpful; its “pro suggest” feature detects the varying lighting and color aspects of what’s being captured and lists five optimized setting options. Users can even shoot 20.7MP selfies with a touch of the 4.8-inch display to indicate where in the scene they want to be seen, turn the K around, aim at themselves and wait for the beep—the K captures three selfies to choose from. samsung.com

Considering the number of selfies snapped with the front camera, it was only a matter of time before someone equipped both sides of a smartphone with the same high-resolution imager. And it’s only a matter of time before HTC’s dual-camera innovation is copied by other smartphone makers. The dual cameras on HTC’s EYE phone (get it? iPhone?), available exclusively from AT&T, aren’t exactly identical. For one thing, the front imager sports an f/2.2 aperture, while the rear an f/2.0. Users can exploit these nearly equal cameras with HTC’s split capture feature, which enables simultaneously recording from both cameras displayed on a split screen, or crop-me-in, which pops video or stills from the front camera into video shot with the rear. And instead of contorting their hands to both frame and capture a selfie, users can just literally say “cheese” to voice trigger the EYE’s front camera shutter. htc.com

Claim to Camera Fame: IP68 waterproof rating, can shoot photos and videos in up to 4.9 feet of water for up to 30 minutes; first smartphone with ISO 12,800 setting

Other than Samsung, Sony is the only smartphone maker with digital camera chops, so it’s no surprise how chockful of photo functions and features the ZED 3 is. In addition to its aquatic alacrity, the Z3v, available exclusively from Verizon, packs a 25mm f/2.0 lens with an 81º view. It includes not only Sony’s SteadyShot optical image stabilization but an intelligent active mode for reduced blur when two subjects are in motion and the user is panning; video pause/resume like a real camcorder, which creates a single long clip with pause cuts instead of innumerable short clips; 4K video recording; simultaneous rear/front camera usage for multi-camera effects; and MultiCamera, which lets users simultaneously control and capture images or video from up to three different Xperias or compatible Sony cameras via Wi-Fi Direct. sony.com

While more than a year old and only available in AT&T versions from Amazon and Best Buy, the Windows Phone 8 Lumia 1020 is still the highest resolution smartphone camera available. Images from the rear 41MP camera are captured via a 1/1.5-inch BSI sensor with 1.12-micron pixels through a 25mm f/2.2 lens. Users can illuminate subjects with its Xenon flash. There are manual settings for shutter speed, focus and ISO. Given its massive resolution, the 1020 lets users recompose full resolution shots—zoom, crop, straighten horizons, change orientation—to create new 5MP versions. The 1020 is packed with Nokia’s unique software “lenses” that enable the creation of startling effects, such as animating parts of an image, isolating a focused object while blurring everything around it, removing unwanted objects from a scene and creating a composite group photo from a burst of shots so everyone has their eyes opened and is smiling, just to name a few. nokia.com