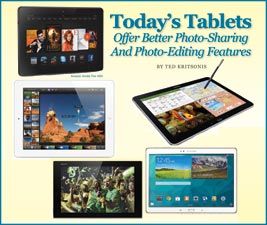 Tablets continue to be mostly about consuming content, like viewing photos, rather than creating content, though photo-editing apps are growing in quality and quantity on all major mobile platforms.

Tablet manufacturers also have been quietly improving their cameras, making it easier to snap better images, and then share them via social media or edit them using any variety of apps, like Photoshop, Instagram or Snapchat. Better screens are also playing a role, making it even easier to filter through images and use tablets as digital frames.

With this in mind, we thought we’d give you our selections for the hottest summer tablets.

Apple iPad
The iPad continues to steer the tablet market as the model to beat, and the iPad Air is the thinnest and lightest Apple has ever produced. Its 9.7-inch, 2,048×1,536-resolution Retina display continues to be among the best on the market. The iPad mini has now gone Retina, too, giving its 7.9-inch display a sharper pixel density of 326 ppi (pixels per inch) that easily puts it among the best in its class.

The versatility of either model is such that the improved rear camera can capture photos almost as well as an iPhone can. A retooled version of iPhoto blends in nicely with the Photo Stream feature inherent in iCloud to keep images flowing and updated across iOS devices. Video gets a similar treatment, particularly with the iMovie app as a starting point for editing footage directly on the iPad.

The bevy of apps goes beyond just tinkering with images. Photography aid apps teach techniques, while other apps can help sample images as they’re taken.

Samsung Galaxy Tab S
This may be Samsung’s most serious attempt at a consumer tablet, thanks in large part to the fact that it has one of the best displays on any tablet. The first time any manufacturer has outfitted a tablet with a Super AMOLED screen, the 10.5-inch model has a sharp, 288-ppi display with rich colors and brightness for excellent photo browsing.

Its 8MP rear camera is also a step up, making it possible to capture good images using the Tab S, including 1080p Full HD video at 30 frames per sec. The open book that is the Android and the Google Play store means photo-editing and other photography apps are readily available to download. And there could be plenty of space to store photos and video, as the 16GB internal storage can be augmented by up to 128GB in the SD memory card slot or 50GB of Dropbox storage for up to two years.

The inclusion of Quick Connect also opens up direct communication with other Samsung mobile devices and Windows PCs, allowing users to transfer content between them seamlessly using Wi-Fi Direct.

Amazon Kindle Fire HDX
A resolution upgrade puts the Kindle Fire HDX among the best displays in the industry at 2,560×1,600, with rich, saturated colors and excellent viewing angles. This is a considerable bump up in pixel density at 339 ppi, making images look sharp and vibrant on a tablet that is also noticeably lighter than its predecessor.

As before, the included Cloud Drive service offering 5GB of free storage plays a role in keeping images readily available. Pricing plans to expand on that are reasonable—and potentially necessary because of the lack of an expansion memory card slot. Other cloud-based storage apps are available to mitigate the limited storage as well.

Both the 7-inch and 8.9-inch models have improved 8 megapixel rear cameras for snapping photos, should you need to. Amazon does curate its own app store, so Android apps have to go through that process before being made available on this platform, which might limit how many photo apps owners can download and install.

Samsung Galaxy Note Pro
Two standout features with this tablet are the 12.2-inch screen size and the S Pen stylus that can be used with virtually any app running on Android. While it uses a TFT LCD instead of the Super AMOLED of the Galaxy Tab S line, it’s still a very nice display with the same resolution.

Browsing through photos is easy with this much screen real estate, and editing them can be a little more precise with the use of the pen. Scribbling notes or doodling over photos is another option, not to mention all the drawing, painting and cartooning apps on Android that can be used with existing photos and the pen.

There is an 8MP camera in the back, but it’s more of an add-on feature, considering how awkward it is trying to shoot with such a big device. It’s easier to just use it as a part-time digital photo frame.

Microsoft Surface Pro 3
Microsoft touts the Surface Pro 3 as a “laptop replacement,” but it is more a hybrid PC and tablet that runs on a full version of Windows 8 Professional. Any desktop photo-editing software will work on the device, including Photoshop, Illustrator, Lightroom, GIMP and more. The clip-on keyboard is the most common accessory (sold separately), yet it’s the Surface Pen that comes with the unit.

The pen is marketed more as a productivity tool for jotting down notes, but it can be used just as well as a precision editing and touch-up tool. The 12-inch, 1,440p display is also sharper and more vibrant than previous Surface models, with “palm block” technology that doesn’t register a resting palm as a touch while writing or drawing.

There is improved battery life and internal storage (if paid for), and even a halfway decent rear camera. Plus, there is the added benefit of being able to tether it directly to a camera during photo shoots.

Sony Xperia Tablet Z2
At just 0.25-inch thin and a lightweight 439 grams, the Xperia Tablet Z2 continues the tradition of waterproof devices Sony has carved out in the market. The 10-inch TFT display’s 1,920×1,200 resolution doesn’t have the same level of sharpness as other models in and around its price range, but unlike most Android tablets, there is little bloatware preinstalled.

Sony also outfitted the tablet with a similar Exmor RS 8 megapixel image sensor to the one found in some Xperia smartphones, which is capable of taking good images in decent lighting. It is technically possible to snap photos while lounging in a pool or hot tub, though it won’t work when submerged due to the lack of a hard shutter button.

Viewing images on the tablet is easy enough, but Sony’s increasing adoption of NFC (Near Field Communication) technology simplifies pairing it with compatible devices, including TVs. With one touch, the Tablet Z2’s screen can be mirrored on a Sony Bravia TV for viewing photos and videos with ease. It does also support MHL and Miracast for TV mirroring on non-Sony TVs, plus DLNA for streaming media from networked storage.