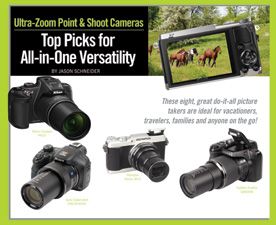 Why do long-range, ultra-zoom point-and-shoot cameras continue to flourish and even evolve while the overall P&S category has been declining? The answer is simple: they provide unmatched all-in-one versatility that appeals to everyone from casual shooters to enthusiasts.

Indeed, most of the latest models in this enticing class have everything but interchangeable lenses, and that includes Wi-Fi and NFC connectivity, Full HD 1080p video capability, advanced AF and AE systems, high-res LCDs, built-in multi-axis image stabilization and, in some cases, electronic viewfinders (EVFs). On the whole, these ultra-zoom models are fast, responsive, satisfying to use and deliver impressive imaging performance, even at high ISOs.

Many of the current cameras in this category provide optical zoom ratios up to an astonishing 60x, rapid burst rates of 5 frames per sec to 10 fps, and much more. In terms of performance and features, these cameras give DSLRs and mirrorless cameras a real run for the money—often with lighter, more compact form factors, and generally at very competitive prices. A good indication of the vitality and competitiveness of this category: several of the cameras covered here are upgraded versions of last year’s models.

A Segmented Ultra-Zoom P&S Market
While there’s no official definition of a long-range or ultra-zoom camera, this class includes three distinct segments: 1) bridge cameras with wide-to-telephoto zoom lenses in the 50x–60x range, DSLR-like form factors and features that may or may not include an articulated LCD and an eye-level EVF; 2) slim, ultracompact models with 24x–30x zoom ranges, possibly touch-screen LCDs but no EVF; 3) compact, high-tech models with zoom ratios of around 21x–30x and advanced features such as Wi-Fi connectivity and accessory EVFs.

Over the past year, the number of models with DSLR-like form factors and 50x–60x zoom ratios have expanded, and they’ve become more sophisticated; slim, long-range zoom models have dwindled. That’s why we’ve included only a few models from categories 2 and 3.

Most of the cameras here provide a DSLR-like handling and shooting experience, albeit without interchangeable lenses, while the slimmer models deliver an engaging mix of classic P&S convenience with vastly enhanced versatility.

Any of the cool contemporary models we’ve selected can provide an excellent backup to an enthusiast’s DSLR, a great all-around picture taker for people on the go, or a terrific option for serious shooters who want to travel light.

Ultra-Zoom Camera Roundup
Nikon Coolpix P900. For extreme distance shooting with spectacular 83x optical zoom, the P900 boasts a 24–2,000mm* Nikkor ED glass lens and 166x dynamic fine zoom. With unrivaled zoom power in a P&S model, it offers a 16 megapixel CMOS sensor and functions for capturing images and Full HD video from afar. Its notable features include: 7-fps bursts; an EVF with an eye sensor; a vari-angle, 3-inch, 921K-dot LCD; a snap-back zoom button to frame subjects when shooting super-telephoto shots; a side zoom control button positioned to combat shake; command and mode dials to adjust settings one-handed; Dual Detect Optical VR technology to achieve the highest level of shake compensation in a Coolpix (5-stops); effects; macro mode; and Nikon’s Snapbridge, for transferring files to a smartphone via Wi-Fi and NFC (Near Field Communication). Plus, built-in GPS and POI (points of interest) let users geotag and view where images were taken on a map. $599.95. nikonusa.com

Samsung Smart WB2200F. Samsung’s 60x superzoom broke new ground in providing a 20–1,200mm f/2.8–5.9 lens—the first with ultra-wide-angle focal lengths of an incredible 20mm equivalent! The lens has Samsung’s iFunction control to adjust aperture, shutter speed, EV and ISOs from the lens. The camera also delivers a full complement of features, including: a 16.4MP BSI CMOS sensor; a 3-inch hVGA LCD plus a 200K-dot EVF; Full HD 1080p video capture at 30 fps; and an ergonomic dual grip. Its built-in Wi-Fi/NFC system provides “tag & go” one-touch sync to a compatible mobile device by touching them together. This connectivity enables the photo beam feature to send photos directly to a phone and the auto share feature to back them up in real time. A remote viewfinder function lets users control the WB2200F with a smartphone—great for shooting selfies and group shots. $449.99. samsung.com

Panasonic Lumix DMC-ZS50. This svelte, minimalist flagship of Panasonic’s ZS series of compact P&S cameras packs a lot of punch into a slim, compact package, including a 12.1MP High Sensitivity MOS sensor and a 30x, 24–720mm f/3.3–8 Leica DC Vario-Elmar zoom lens coupled to an advanced Venus Engine processor. It’s one of the few cameras in the compact ultra-zoom class to include both a 3-inch, 1,040K-dot LCD monitor and a 0.2-inch, 1,66K-dot live viewfinder with 100% coverage that can be set to provide a 60-fps refresh rate. Other impressive specs include: a choice of RAW and/or JPEG files; Full HD 1080p video capture at 60 fps; time-lapse recording; ISO settings to 6400; an impressive 10-fps burst rate; built-in Wi-Fi connectivity and GPS; hybrid OIS to ensure sharp handheld images and videos; photo style mode; and a level shot function to keep the image level while recording video, even when the camera is tilted. $349.99. panasonic.com

Nikon Coolpix P610. With its striking appearance and ergonomically rounded contours, including a large comfortable handgrip, this 16MP DSLR-styled entry has all the bells and whistles. And those include a 60x, 24–1,440mm equivalent Nikkor ED glass lens that gets out to an amazing 120x using Nikon’s digital dynamic fine zoom function. Other high-tech features include: a built-in EVF and a 3-inch, vari-angle 921K-dot LCD; filter effects, special effects and picture controls for added creativity; a macro mode; Full HD video recording with stereo audio recording; the ability to create a time-lapse video using its time-lapse feature; 7-fps shooting at full resolution; 5-stop, dual-detect optical VR (vibration reduction) image stabilization to help minimize the effects of camera shake; and integrated Wi-Fi and NFC connectivity. Another plus for travelers is the camera’s built-in GPS and a points of interest (POI) function, which allow users to geotag shots and view where they were taken on a map. $429.95. nikonusa.com

* All lens focal length ranges are in 35mm equivalents. 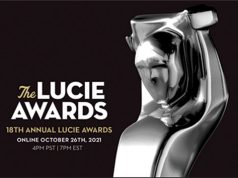