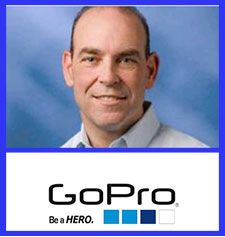 San Mateo, CA—As it prepares for a recently announced Initial Public Offering of its common stock, GoPro appointed Jack Lazar as the company’s chief financial officer. Lazar will report directly to GoPro’s founder and CEO, Nicholas Woodman, and will have responsibility for the company’s global financial operations. The appointment was approved by GoPro’s board of directors and is effective immediately.

“We couldn’t be happier that Jack Lazar has joined GoPro,” said Woodman. “His experience and leadership will be extremely valuable as GoPro explores new markets and opportunities in both consumer products and media. Beyond his expertise in finance, Jack is a great cultural fit at GoPro and we’re excited to have him on our team.”

Lazar joins GoPro after serving as senior vice president of Corporate Development and General Manager from 2011–2013 at Qualcomm Atheros, a subsidiary of Qualcomm, Inc. Previously, he held various executive positions, including senior vice president, Corporate Development; chief financial officer; and secretary at publicly traded Atheros Communications from 2003 until it was acquired by Qualcomm in 2011.

In addition to prior executive positions at NetRatings, Inc., Apptitude, Inc., and Electronics for Imaging, Lazar began his career at Price Waterhouse, is a certified public account and holds a B.S. in commerce from Santa Clara University. He also serves on the board of directors and audit committees of Silicon Laboratories and TubeMogul.

“As a CFO who is also an avid mountain biker, I am extraordinarily excited and honored to join GoPro’s leadership team,” said Jack Lazar. “As both a premier consumer products company and an enabler of compelling media content, GoPro is a high-growth company with a strong track record for innovation and for defining new markets.” gopro.com