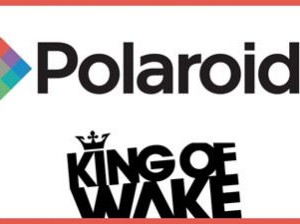 Ridgefield Park, NJ—Polaroid is the official action sports camera sponsor of the 2013 King of Wake series—an elite pro wakeboarding series that ties the sport’s most prestigious contests together into one season-long points chase to see who rules the wake.

The King of Wake will make eight stops throughout the United States, commencing in Orlando and ending in August in Grand Rapids, Michigan. The Polaroid Action team is going along for the ride, giving away free tickets to each event and having a booth at every stop on the tour

At each stop, spectators have the chance for one-on-one meet-and-greets and autograph signings with the tournaments’ athletes. And, each day hundreds of prizes are given away, including autographed T-shirts, Polaroid instant cameras and autographed Polaroid XS100 HD waterproof sports action cameras. Polaroid is also showcasing its mountable sports action video camera and instant digital camera lines at the booths.

The Polaroid Action team, coordinated through C&A Licensing LLC, an authorized Polaroid licensee, is compiling footage from the contests using the Polaroid XS100 for a commercial that will air during the King of Wake Games on the NBC Sports Network this summer. polaroid.com