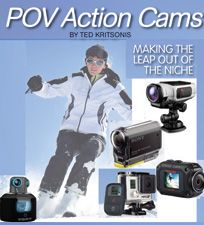 POV (point of view) action cameras are no longer a fringe category now that more manufacturers are entering the fray and bringing their own designs and technology to market. The increased competition has led to more iterative and incremental upgrades that improve the basics of both performance and durability, though full-frame 4K-resolution remains elusive and could be the next significant move in the category this year.

GoPro Hero3+
Adding the + to what was already the most renowned POV camera amounts to a body that is 20% smaller and lighter, even when in its housing (waterproof to 130 feet). And its battery now lasts up to 30% longer than the previous model. A new “superview” mode is a wider angle video setting that captures more of the shooter and the surroundings, while an auto low-light mode changes the frame rate based on the type of lighting.

It can record in higher resolution (1440p in 48p and 4K in 15p), though video capture is mostly incrementally improved when compared to the previous model, save for the sharper lens and reduction in image artifacts. An uptick in audio quality with better wind noise reduction is another incremental upgrade to flesh out the improved video capture. The camera can also snap 12 megapixel stills at up to 30 frames per second and includes a time-lapse mode with seven different intervals. Built-in Wi-Fi and iOS and Android apps are in the mix as well, adding another level of functionality to the POV cam.

The Silver Edition Hero3+ is a slight step down from the premier Black Edition, doing away with 1440p and 4K shooting modes, but including the same frills of lighter weight, better low-light performance and the same battery life. SRP: $399.99, Black Edition; $299.99, Silver Edition. gopro.com

Sony HDR-AS30V
The most obvious design tweak to the HDR-AS30V is the new waterproof housing that is thinner and lighter, yet with a reduced depth limit of 16 feet (compared to 197 feet with the previous HDR-AS15). Then there’s the live-view remote, the waterproof controller that connects to the camera wirelessly for basic playback and recording controls as an alternative to using a smartphone. If users want to sync with a phone, they can pair compatible ones more easily with the camera’s built-in NFC (Near Field Communication).

Under the hood, Sony has used the same sensor and lens in this camera, so its Full HD 1080p video quality isn’t improved in any significant way. There is GPS, however, adding a number of metrics to footage for those who like to see the numbers behind the antics. Naturally, users don’t have to select the overlay if they don’t want to. It also takes 11.9MP still photos in addition to interval still recording for time-lapse photos.

Mounting is made a little easier this time around as well, thanks to a new chest harness and headband mount that have been designed for use with this model.
$269.99 sony.com

iON Air Pro 3 Wi-Fi
This camera carries the familiar cylindrical design of the previous models, though comes in a bit lighter and offers more durability to boot. The waterproofing has been improved to a depth of 49 feet using the same type of housing the previous model had. Footage has finally been bumped up to 1080p at 60 fps, and a vibration reduction setting to help tone down shake was added. Of course, it also has its standard on-and-off toggle switch at the top, coupled with an improved microphone.

Being the Wi-Fi edition, it comes with iON’s Wi-Fi Podz that clips onto the back and works with the iOS and Android app to toggle with recording and playback controls as well as transferring files. It can take 12MP stills using its Sony backside-illuminated CMOS sensor, though they only come in 4:3 aspect ratio, so cropping might be necessary for videos that include photos. $349.99 ioncamera.com

Geonaute 360
Introduced at CES last year, the Geonaute is still a camera in the making, and it offers a promising glimpse of what adding extra viewpoints can do. It’s actually three cameras in one that capture a combined 360º view together. Each lens section is 8MP and can shoot videos at 2,048×1,024 resolution, along with 4K still images. The 3000mAh battery inside is able to muster up to two hours of video on one charge.

What’s particularly unique about the footage it shoots is that the orientation can be navigated by the viewer after the fact. Viewing it on an iPad connected to a TV and tilting or turning it any which way physically will mirror the view of the camera on-screen, making for what Geonaute believes is a more immersive experience that includes more than just the shooter’s point of view. An online platform called Play Geonaute is also going to bring that experience to the web browser. $399. geonaute.com

Garmin VIRB
Garmin entered the POV action cam market with two models, the regular standard VIRB and the VIRB Elite. They both have 1.4-inch displays and are waterproof down to a depth of one meter for up to 30 minutes. The larger waterproof bodies add extra girth compared to those of competitors, but this also translates to an extra hour of battery life. They can capture footage at 1080p at 30 fps or 720p at 60 fps, along with still images at 16MP. Mounting options abound with tripod, bike, head, shoulder and wrist mounts, plus an adapter to use with those of third-party manufacturers.

The Elite model includes Wi-Fi and GPS, offering the ability to control it remotely with an accompanying smartphone or a compatible ANT+ device, like an Oregon or Edge remote control. Garmin has a few separately sold sensors for temperature, biking and heart rate that can overlay that information on recorded footage. $399.99, VIRB Elite; $299.99, VIRB. garmin.com

JVC Adixxion GC-XA2
JVC’s “quad-proof”—waterproof, shockproof, dustproof and freezeproof—action camera gets an upgrade on a number of levels, including a larger 8MP CMOS sensor, the ability to shoot in 720p at 120 fps for slow motion recording in addition to Full HD 1080p, waterproofing down to a depth of 16.4 feet, a higher audio bit rate, and better noise reduction. In addition, the 1080p frame rate has been bumped up to 60 fps, except JVC hasn’t added 4K resolution, much like other manufacturers in this category.

As before, built-in Wi-Fi can bridge footage to iOS and Android smartphones, as well as streaming live via Ustream. The GC-XA2 only comes with one flexible mount that can be fastened to a helmet or stuck to a dashboard, which is notable because the previous model also included the goggle mount. Other mounts for handlebars, roll bars and the missing goggle mount are available separately. $299.95. jvc.com 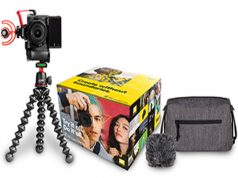