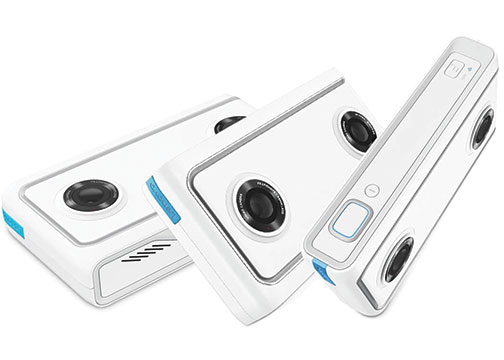 “Launching the Lenovo Mirage Solo and Lenovo Mirage camera with Daydream together reaffirms our commitment to designing products that are different for the sake of being better,” the company announced. “With their affordable price points, this VR duo brings innovative, new technologies such as WorldSense and VR180 to everyday users. More so, they simplify the VR experience with unexpectedly easy set-up and the ability to record, watch and share your own VR video.”

Supporting YouTube’s new VR180 video format, the camera is engineered to capture truly immersive VR images and videos. Moreover, captured content is easily shareable through native integration with YouTube and Google Photos. And according to its specs, the camera provides up to two hours of continuous usage for high-resolution video recording.

The pocket-sized point-and-shoot camera is designed to simplify the technology needed to capture 3D photos and videos. Users do not need specialized VR videography skills or professional camera gear to shoot immersive 3D VR videos and photos. For simplicity, operation is via just three buttons—power, shutter and function. Users can also toggle between three modes: photo, video and live broadcasting.

The camera employs dual 13MP cameras with fisheye lenses and a 180ºx180° field of view. The dual cameras capture the same images or video at slightly different angles to form a 3D effect in which near objects look near, while far objects appear far.

Photos and videos taken with the Mirage can be uploaded to users’ personal Google Photos and YouTube accounts for viewing and sharing. In addition, they can be viewed on a standard browser on the Mirage Solo with Daydream headset. The camera also works with most popular VR headsets.

Furthermore, users can store captured content on the camera’s 16GB of onboard eMMC. In addition, they can use an optional microSD card for up to 128GB of additional storage. All content can also be uploaded to Google Photos as well as to live broadcasts and videos via a YouTube VR account.

In addition, users can pair the camera with a smartphone via Wi-Fi Direct. Once they download the VR180 app by Google, they can make the phone’s screen act as a viewfinder. Using the phone, they can then preview all their photos and videos.

About the size of a smartphone, the Lenovo Mirage camera has a retail price of $299. lenovo.com