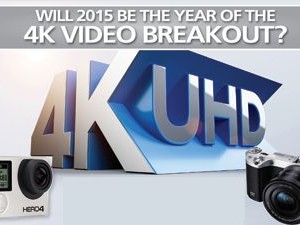 The Ultra HD 4K video format, which delivers roughly four times the resolution of Full HD 1,920×1,080, has been around for well over a decade. Indeed, the first commercially available 4K video camera, the Dalsa Origin, was released back in 2003, and Sony was offering 4K projectors as early as 2004.

The 4K format used in cameras shooting video in the standard 16:9 HD aspect ratio does not quite have a resolution of 4,000 pixels (the definition of 4K) measured horizontally. It is technically UHD (Ultra High Definition), which provides a resolution of 3,840×2,160, or a total of around 8.3 megapixels. However, that is certainly sufficient to deliver spectacular image quality that will literally blow Full HD 1080p out of the water, even if it is not equivalent to the 4,096×3,112 pixel (4:3) format used in digital film production.

The main advantage of recording video in 4K is superior resolution of fine details. Even if the final video is reduced from 4K to 2K for more convenient viewing, some of that detail will be retained.

In 2012, Canon pioneered the adoption of 4K as the high-definition video standard by introducing two high-end cameras with 4K video capability: a full-frame 18.1MP DSLR, the Canon EOS-1D C ($7,999 body only); and the Canon Cinema EOS C500 ($15,999), a camera aimed at professional cinematographers that provides 4K RAW (4,096×2,160) output. Both are awesome machines and still in current production, but based on persistent rumors we’d expect upgrades and/or additions to Canon’s 4K offerings in the consumer arena later this year.

4K Video Viewing Options
One of the main factors limiting the widespread adoption of the 4K standard across all classes of cameras is that you can’t view 4K video in its full glory on a standard HDTV or monitor—you have to down-res the files. However, according to my brief unscientific survey (aka an Internet search), you can now buy good 4K monitors starting at about $450 and pro-caliber ones for under $1,000. And 4K TVs from reputable manufacturers start at about $900, although topnotch models go for $1,200–$1,500.

Undoubtedly as prices for these units come down, shooting 4K will be an even more attractive proposition, but even now you can get into editing and viewing 4K without breaking the bank. As one salesman in the electronics department of a big-box store said to me, “In a couple of years you won’t even be able to buy a large-screen TV that’s not 4K enabled.”

The other issue facing 4K shooters is humongous video files that require large-capacity, high-speed memory cards to record and take up huge amounts of space on a computer hard drive. However, with the proliferation of high-res cameras, consumers are already accustomed to buying high-speed, high-capacity memory cards, and also storing their files on accessory solid state hard drives with capacities in terabytes, so this should not be an insurmountable obstacle.

Eight Great 4K Cameras You Can Sell Now
Now that you have a good overview of the 4K video revolution and why it’s likely to become the dominant mode of video capture in the near future, here’s a list of eight 4K-capable cameras in four popular categories: mirrorless interchangeable-lens cameras with DSLR functionality; action cams; camcorders; and (wouldn’t you know it) smartphones.

Samsung NX500. This sleek, new mirrorless CSC combines Samsung’s latest design and technology features for everyday use with the capabilities required by professionals. The portable NX500 employs a 28MP BSI APS-C sensor along with Samsung’s DRIMeV processor, the NX AF III system, a 3-inch Super AMOLED touch display, and updated connectivity via Bluetooth and Wi-Fi. The biggest news of all: it records true 4,096×2,160 video at 24 fps, 3,840×2,160 at 30 fps, and Full HD 1,920×1,080. And with HEVC (H.265) support, it captures extreme details using half the storage space typically used for HD recording. This is complemented by 9-fps continuous shooting and Samsung’s auto shot function, which uses motion detection to predict when to capture the perfect shot in difficult scenarios, as when a child fields a baseball. Other features include ISO settings of 100–51,200 and the ability to capture still images from interval capture mode that can be transformed into a UHD time-lapse video in-camera. With a 16–50mm zoom lens and a flash unit, $799.99. samsung.com

POV Action Cameras
Sony FDR-X1000V. This new Sony Action Cam packs a remarkable level of performance and features into an ultracompact unit measuring a mere 3.0×2.0x3.5 inches and weighing only 4.0 ounces complete with battery! The splashproof, shockproof cam can record UHD 4K at 3,840×2,160 at 30p, as well as 1080p, 720p and 480p video. Its f/2.8 Zeiss Tessar lens captures an ultrawide 170º field of view equivalent to 17.1mm. It can shoot 8.8MP stills with burst/interval modes and slow-mo 120 fps in 1080p mode, as well as 240 fps at 720p. The FDR-X1000V records in XAVC-S and MP4 (H.264) formats, features a built-in stereo mic with wind noise reduction, manual white balance options and provides highlight movie maker—an in-camera editing function. Other features include: Wi-Fi for remote monitoring and control via a smartphone/tablet; improved SteadyShot IS; direct pixel readout to reduce jagged edges and false coloration; an Exmor R sensor; a Bionz X processor; and a range of manual exposure setting adjustments. Its housing is waterproof to 33 feet. $499.99. sony.com

GoPro Hero4 Black. The latest entry in this iconic line captures 4K UHD 3,840×2,160 video at 30, 25 and 24 fps, 2.7K at 60/50/48/30/25/24 fps, and HD video at various resolutions, including 1,080 at 120, 90 and 80 fps. It also captures 8.3MP stills from video and 12MP stills at bursts up to 30 fps. It can be mounted in a number of creative ways for POV photography—a GoPro trademark. Its ultra-wide-angle glass lens provides a superview option to widen the angle and capture more of the background, and its housing is waterproof down to 131 feet. Other features include: Wi-Fi and Bluetooth connectivity; video and photo time-lapse modes; a Protune mode for simultaneous video and photo capture, as well as providing control over color, ISO exposure and white balance; one-button operation with QuikCapture; plus auto low light and night photo modes. Flat and curved adhesive mounts are included, and the Hero4 Black is said to offer two times faster processing than its predecessor—a key factor in enhancing its slow-motion capabilities. $499.99. gopro.com

4K Camcorders
JVC GY-LS300. Geared for serious enthusiast videographers and pros, the GY-LS300 4KCam is compact yet boasts a 4K Super 35 13MP CMOS sensor. Plus it accommodates cinema and photographic lenses and adapters for cinematic effects. Recording in various formats, including 4K Ultra HD, Full HD with 4:2:2 sampling, standard def and web-friendly formats like H.264, it incorporates a Micro Four Thirds lens mount. Super 35 cinema lenses retain their native angle of view, and when MFT, Super 16 and other size lenses are used, JVC’s Variable Scan Mapping technology maintains the lens’s native angle of view. The LS300 can be connected to a 4K UHD monitor via an HDMI cable to view its live 4K signal. It also down-converts UHD signals to standard HD for output through built-in SDI or HDMI connectors. Dual SDHC/SDXC slots enable simultaneous recording and relay recording, where users can shoot continuously over multiple cards; when one card is full, the camcorder automatically switches to the other. And because cards are hot swappable, there’s no limit to the shooting time. Also featured are a 3.5-inch LCD and 1.56MP color viewfinder, both with smart focus assist, and two-channel audio recording. $4,450. pro.jvc.com

Sony FDR-AX33. The palm-sized AX33 is the most compact Sony 4K Handycam camcorder—it’s about 30% smaller and 20% lighter than the FDR-AX100, which also records in 4K. The FDR-AX33 features Balanced Optical SteadyShot image stabilization and UHD 4K, 100M-bps bit-rate recording at 30 and 24 fps in the 3,840×2,160 format and up to 60 fps in Full HD 1080p. For more advanced videographers, it includes a customizable manual ring and manual button that can be assigned to key functions like zoom, focus and exposure adjustments. The camera is equipped with a 29mm Zeiss Vario-Sonnar T* lens with 10x optical zoom and a high-performance electronic viewfinder. Its 3-inch, 921K LCD display performs well even in bright sunlight. The camcorder can also “trim” 4K images from video frames, enlarging a selected portion of the frame to fill the screen with Full HD quality. And users can extract stills from 4K footage without impacting the 4K video quality. Other features include: built-in Wi-Fi/NFC; XAVC-S and MP4 formats; Dolby Digital 5.1 channel audio; HDMI input to play content from smartphones and other devices; and live streaming. $999.99. sony.com

Panasonic HC-VX870. This sleek 4K UHD camcorder not only captures 3,840×2,160p video at 30 fps but also takes 8MP photos via 4K video recording with 4K photo mode, and it provides hybrid OIS 5-axis image stabilization and a 20x, f/1.8–3.6 zoom lens with intelligent zoom to 40x. It can capture slow motion 1080p video up to 240 fps and provides an HDR video recording mode. Other features include built-in Wi-Fi for remote operation and live view plus an IR night mode that captures a monochrome image even where there is no visible light. Users can even tether their smartphone to the HC-VX870 via Wi-Fi to provide a second shooting angle and superimpose the second image on or alongside the main image thanks to picture-in-picture settings in the menu. By pushing or rotating the manual dial, they can adjust assigned functions, including focus, white balance, shutter speed, aperture, sharpness and color saturation without having to enter the menus. $899.99. panasonic.com