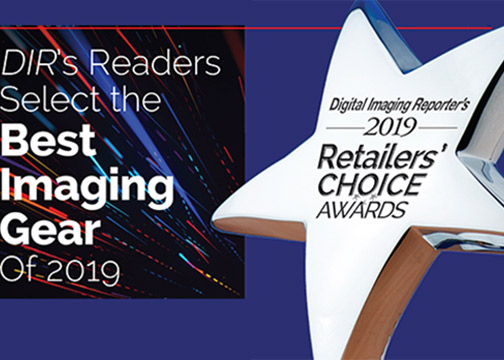 We are pleased to announce the results of DIR’s 6th Retailers’ Choice Awards. The annual awards highlight the imaging products favored in our online survey of nationwide photo specialty retailers. We asked 79 dealers to indicate their favorite products in 13 different categories. The criteria were product quality, support and ease of selling.

The online survey took place from April 1 to April 15, 2019. In addition, the survey reflected products in the marketplace or announced previous to those dates. All responses were confidential. Moreover, we received a 37% response rate from our survey. We appreciate those dealers who took the time to participate.

Here are the 2019 Retailers’ Choice Awards winners and honorable mention products in each category.

The Nikon D850 was the runaway winner in this preeminent category. It earned an impressive 72% of the votes, which clearly reflected the market’s enthusiasm for this DSLR. The Canon EOS 6D Mark II was a distant second.

Nikon and Canon were in a horse race for this category. The Canon Rebel T7i crossed the finish line first. The Nikon D3500 actually came in second as a write-in candidate, surpassing the Nikon D750 in the category.

In a hotly contested category, the Sony Alpha a7R III eked out a win with 29% of the vote. The new full-frame Nikon Z series garnered only one less vote, setting up an exciting race in dealer stores this year. In addition, the Fujifilm X-T3 finished a distant but respectable third with 17% of the vote.

In this very competitive class, there was a virtual tie. The Canon G7 X Mark II received just one more vote than the Fujifilm X100F to edge out a victory. Moreover, the Sony Cyber-shot DSC-RX100 VI received 20% of the vote as a write-in selection.

With a respectable 62% of the votes, Nikon’s ultrazoom Coolpix cameras once again went a long way in solidifying Nikon’s position in this category. Both the Coolpix P900 and P1000 proved the favorites. In addition, the Panasonic Lumix DC-FZ80 followed to earn honorable mention for a third time.

Olympus once again dominated the action in this category, with an impressive 57% of the votes. It was followed by Fujifilm’s XP130 with 24%. Moreover, Nikon’s popular Coolpix W300 was the third choice for dealers in this category.

The ProMaster Cityscape bag line carried the day. It toppled Think Thank Photo from their three-year winning streak by earning half of the votes in this category and winning for the first time. Think Tank held on in second place, followed by the Lowepro ProTactic II.

All of the action was once again with GoPro in this category. Their flagship Hero7 Black edition dominated with 52% of the votes. GoPro was followed by the Sony Cyber-shot DSC-RX0 II. In addition, the Olympus TG-Tracker and DJI Osmo Pocket received the balance of the nods in this category.

The Ricoh Theta V once again showed all-around dominance with 43% of the vote. It was followed by the hot Insta360 One X. In addition, both the Humaneyes Vuze XR and Kodak PixPro Orbit360 4K rounded out the votes in the 360º category.

ProMaster clearly stood up to the competition with an impressive 63% of the vote in the best tripod category. The Manfrotto 057 Carbon Fiber also showed it had a leg to stand on. They were followed by write-in votes for the standout Sirui ET-1004.

We added drones to our awards again this year. The results showed DJI still flying high above their competitors with 69% of the vote in the best drone category. The Yuneec Typhoon H Plus Pro also had an impressive showing, with 23% of the dealer votes.