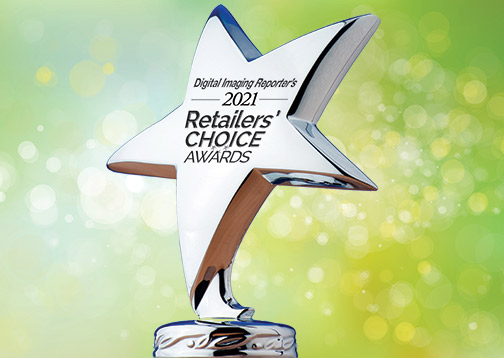 We are pleased to announce the results of Digital Imaging Reporter’s 7th Retailers’ Choice Awards. The awards highlight the imaging products favored in our online survey of nationwide photo specialty retailers.

We asked 70 dealers to indicate their favorite products in 13 different categories based on product quality, support as well as ease of selling.

Moreover, each survey question included at least four specific choices, as well as an area where dealers could write in their favorite products if they were not listed.

The online survey took place from September 23 to October 8, 2021. In addition, the survey reflected products currently in the marketplace or announced before those dates. All responses were confidential. What’s more, we received a 32% response rate from our survey. We appreciate those dealers who took the time to participate.

Here are the 7th Retailers’ Choice Awards winners as well as honorable mention products in each category.

The Nikon D850 was the close winner in this preeminent category. It earned 56% of the votes, which clearly reflects the market’s enthusiasm for this workhorse DSLR. The Canon EOS 5D Mark IV was a respectable second.

The Nikon D6 and Canon EOS-1Dx Mark III pro cameras were in a photo finish horse race for this category. Notably, it ended in a tie between the two powerhouse DSLRs.

In a hotly contested category, the Canon EOS R6 secured a win with 50% of the vote. The Sony Alpha 7 III mirrorless ILC came in a respectable second; it received 28% of the votes. In addition, the Nikon Z 5 landed in the third spot.

In this newly contested category, Sony came out the dominant winner. Its flagship Alpha 1 garnered 61% of the vote. The Nikon Z 7II landed 22% of the votes for a respectable second place.

With a notable 44% of the votes, the Nikon Coolpix P1000 once again went a long way in solidifying its position in this category. This year, the Sony Cyber-shot DSC-RX10 IV came in a close second with 39% of the vote. In addition, the Panasonic DMC-FZ300 took an admirable third.

In this new category based on recent trends, we found the Sony Alpha ZV-E10 to be the most popular entry; it commanded 61% of the vote. It was followed by the Panasonic Lumix G100 with 17%. The Nikon Z 50 also ran a close third.

The ProMaster CityScape camera bag line carried the day for the second year in a row. It topped Think Thank Photo and Lowepro, garnering half of the votes. This was followed by a virtual tie from the other competitors.

In this close category, the action was once again with GoPro’s camera. Their Hero9 Black edition dominated with 35% of the votes. It was followed by Sony’s RX0 II with 29%.

In another hotly contested race, Tamron ruled as their 35mm f/1.4 prime notched an impressive victory with Sigma very close behind. Moreover, the Sony FE 50mm f/1.2 GM came in a respectable third.

This was another very competitive category with many favorites. However, Sigma took the top prize with 39% of the vote. It was followed by Canon, with Nikon and Sony lens entries only one vote behind.

ProMaster clearly stood up to the competition with an impressive 56% of the vote in the Best Tripod category. The Manfrotto Befree Advanced also showed they had a leg to stand on; it tied the Gitzo Systematic series for second place.

In another new category reflecting the new normal, the Sony Alpha 7S III was a dominant winner, with a strong 65% of the vote. However, the Nikon Z 6II scored an impressive second place win.