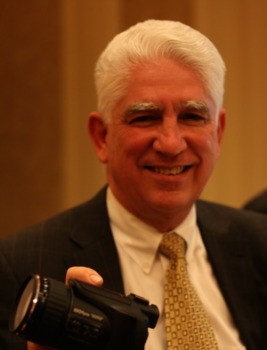 It’ll hit the market this March at a hefty $999, but Casio is offering Americans a new camera which company spokesman Bill Heuer boldly says “could change the world of photography.”

It’s called the F1 and what it does, which at this point in the industry is truly unique, is shoot 60 frames per second, all at 6-megapixel resolution. (Most digital cameras these days can capture up to 10 frames in burst mode.)

“Now, you have the opportunity to get the precise moment that the bat hits the ball,” says Heuer, who unveiled the F1 at a CES press conference. “You can get the tennis ball compressed against the racket.” Heuer says the F1’s target market will likely be professionals and serious amateurs, but also parents with the desire to document decisive moments in their children’s games. Scientists may also find the F1 desirable, says Heuer, to help study an object in motion frame-by-high-res-frame.

The Casio EX-F1 is not a small camera, due to a 12x optical zoom lens, and Heuer acknowledges that it borders on the HD camcorder category, shooting 1200 frames per second in “high speed movie” mode. “We consider this the ultimate digital camera,” says Heuer. “It makes you realize how much you’ve been missing.”