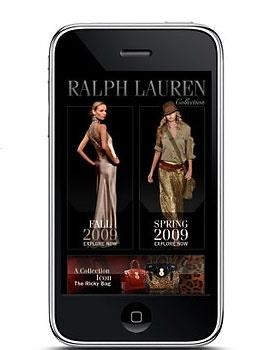 A new iPhone app has just been made available by Polo Ralph Lauren Corp, that is interesting on several fronts for the imaging industry.

First to the app itself – the fashion company behind the Polo and Club Monaco brands, said last week that its smaller Rugby brand was launching an iPhone application that lets users design their own shirts. Rugby is a collegiate-inspired brand that targets young adults and has a dozen stores in the United States.

Rugby’s application, that was made available last week for Apple Inc iPhone and iPod touch devices, allows consumers to customize 19 products, including sweaters, shirts, and sweatshirts. They also added the ability to download photos of themselves in their creations.

David Lauren, senior vice president of advertising, marketing and corporate communications and Ralph Lauren’s son, said in a released statement that the action reflects what the company calls "merchantainment", a blend of merchandising and entertainment.

What’s interesting about this for the imaging industry is the fact the app directly involves consumer photos and that those resulting images will be shared all over the Web.

This represents another opportunity for quick thinking imaging retailers to zero in on an affinity group that is involved in a unique activity that involves imaging.

The other part of the equation that is worth noting is the “make-your-own” aspect to this app. The makers of the Flip Mino video cameras, Pure Digital, created a similar application on their website whereby consumers could design their own Flip Mini camera. The idea was a huge success for the company.

“The key here, once again, is engagement,” began retail analyst Lauren Sosik. “Manufacturers are changing the direction of their marketing plans as they are turning to the end-user to push their brands. Smart retailers are doing the same thing. Instead of just looking to get customers, you can create evangelists for your location and brand.”