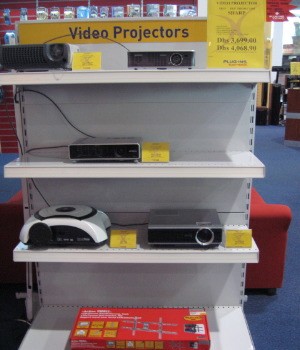 Hometech Middle East expo kicked off Sunday in Dubai, United Arab Emirates, bringing together an international collection of dealers, distributors and vendors for the region’s largest consumer electronics trade show. The event began with some fanfare as His Highness Sheikh Mohammed bib Rashid Al Maktoum cut the opening ribbon and took a personal tour of the convention center.

Hometech features about 300 exhibitors, many familiar to US readers (Monster, Hitachi, LG, Samsung, Harman, Optoma) in 80,000 square feet of exhibit space along with two days of keynotes and seminars. The Consumer Electronics Association has partnered with Hometech, which is produced by Messe Frankfurt, to grow the CE industry is the Middle East region. Next year the show will be renamed CES/Hometech.

The Middle East, and the UAE in particular, present strong opportunities for consumer electronics. The region is one of the fastest growing markets in the world, with over $47 billion invested in new housing and $7 billion annual sales in electronics–a number that’s expected to double by 2010.

Dubai has the ninth-largest port in the world and is a popular tourist destination for around one billion consumers. The population, largely expatriates in the UAE, are tech savvy and have access to a large expendable income.

Flat panel TV and home theater systems dominated the exhibit space, which a nearly equal amount devoted to car audio, which many vendors described as a booming category in the region–perhaps due to the choking traffic congestion that frequently plagues Dubai during the work week.

Part of a CEA-sponsored tour of the expo included a stop at a new store by one of the region’s most successful CE chains, Plug-ins. Located in a new, unfinished, upscale development called Festival City, the Plug-Ins store we visited looked remarkably like a US Best Buy. Division manager Bradley Bennett said the location sold about 1,000 flat panel TVs a month, even without any high definition content available from broadcast, cable or satellite.

Even with all the positive growth and development, CE retailing in the region is not without it’s problems. At a Monster Cable dinner, Sofyan K. Almoayed, managing director of Khalid Amoadyed and Sons in Bahrain gave a presentation on many of the issues, including a lack of Arab language merchandising and manuals (he specifically called out Apple for lacking an Arab language iPod), cultural conflicts and competition. The region also lacks skilled installers with high-end audio/video expertise. One attendee familiar with the situation said most installations are done by electricians with little training in home theater.