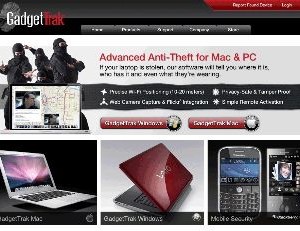 ActiveTrak, a manufacturer that specializes in theft recovery software for consumer and business devices, recently announced a 95 percent recovery rate for laptops and smartphones running their recently released GadgetTrak application.

The company explains that, “compared to FBI crime statistics that reveal only 10 percent of all burglaries are actually solved, owners of a mobile device should be advised that using GadgetTrak dramatically increases the chances of recovery should their device be stolen or lost.”

In addition to ActiveTrak’s high recovery rate, over the past year the company has helped law enforcement catch burglary suspects, and break up device and identity theft crime rings.

“Remote theft recovery software like GadgetTrak gives detectives a new weapon in their arsenal that surpasses any other tool available to help catch burglary suspects in a matter of days,” said Special Agent Marc Hinch with California's San Mateo County Vehicle Theft Task Force. “GadgetTrak is key to catching criminals this summer, a season notorious for an increase in thefts.”

GadgetTrak offers theft recovery software for laptops, smartphones, and portable media devices, including the first such security product for the iPad. Protected by GadgetTrak, the company claims that a lost or stolen device can be pinpointed on a map within roughly 10 feet using GPS, Wi-Fi positioning or cell phone triangulation. Using a device’s onboard camera, GadgetTrak can automatically take a picture of a theft suspect and remotely lock the device as well as completely wipe any data.

“Most homeowners do not keep track of product serial numbers, so finding common electronic devices once they’re sold at pawn shops, or on Craigslist or eBay, and returning them to their owners is virtually impossible,” said Ken Westin, ActiveTrak founder and CEO. “With GadgetTrak, we’ve been catching thieves in the act for years, not only recovering laptops and mobile phones for our customers, but also solving larger crimes including theft rings.”