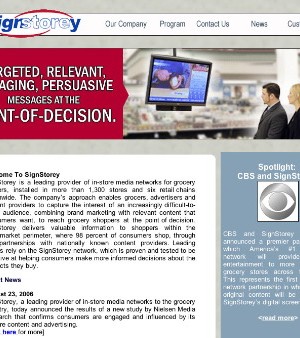 As in-store advertising gets more and more sophisticated with educational videos and on screen demos being used to support on floor sales teams, it’s interesting to note their effectiveness is apparently on the rise. According to a recent report conducted by Nielsen Media Research, consumers genuinely seem to enjoy watching ad-supported media while shopping and, the report adds, their buying decisions can be swayed by the messages.

The study claims that 68 percent of those surveyed say in-store ads would sway buying decisions while 44 percent say they would actually swap a product they had intended to buy for one advertised on an in-store network such as SignStorey. While the concept of ad-supported TV in-store has primarily been the domain of grocery and wholesale stores, the idea is gaining traction outside those channels, particularly in areas where consumer education is a vital part of the buying equation.

“Shoppers today have a thirst for product knowledge that wasn’t present years ago,” began retail analyst Martha Refik. “They soak up information more readily, partly because they have so many options from which to draw. A well done in-store television ad can educate and truly ignite sales today.”

The in-store media advertising market is said to be an over $100 million market as research house PQ Media recently claimed the market enjoyed a 45 percent increase in revenue in 2005 over 2004 to just over $100 million. Other in-store networks include InStore Broadcasting Network and Ignition.