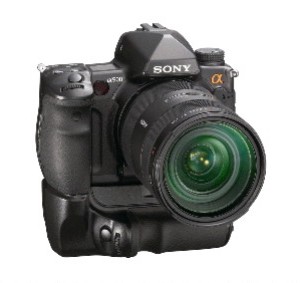 After much speculation on a model everyone knew was coming, Sony has officially introduced its full-frame (alpha) DSLR-A900 camera, telling us this one is, “aimed at serious photo enthusiasts looking for traditional SLR performance with the added benefits of digital photography.”

The A900’s CMOS sensor was making news weeks ago for its 24.6-megapixel res and Sony’s claims of super fast image processing with a new dual BIONZ processing engines. The camera is also the first to have a body-integrated image stabilization system for a full-frame sensor with Sony’s SteadyShot Inside anti-shake system.

Sony is citing the camera’s distinctive pentaprism and nostalgic body design saying, “it will evoke its full-frame optical performance.” The A900 features a bright, clear optical viewfinder with 100 percent field of view coverage.

“The DSLR-A900 introduction solidifies Sony’s position as a leading camera manufacturer that can meet the demands of serious enthusiasts,” said Phil Lubell, director of digital camera marketing at Sony Electronics. “It represents the best in sensor and image processing technologies and offers enhanced functions, performance and reliability so photographers can push their creativity to the limit.”

Back to the spotlight stealing sensor – this Exmor CMOS sensor , “delivers the photographic expressive power of wide angles and perspective that only a 35 mm full-frame sensor can offer, and is designed to take advantage of the resolving power of high-precision lenses. Its high pixel count and large size provide enhanced image detail and a wider dynamic range for natural color reproduction and subtle tonal gradations,” the company explains.

The sensor is produced using proprietary Sony planarization technologies to ensure an ultra-flat surface across the entire imaging area. Instead of a single analog/digital convertor, the sensor uses over 6,000 on-chip, column-parallel A/D converters to convert analog signals to noise-resistant digital signals at the earliest possible stage. The result, Sony says, is reduced noise and high-speed transfer of data.

While keeping pace with the imaging industry’s rapid fire DSLR announcements has been almost impossible lately, hold on to your hats as another one of the big boys is planning a major announcement in the coming days.