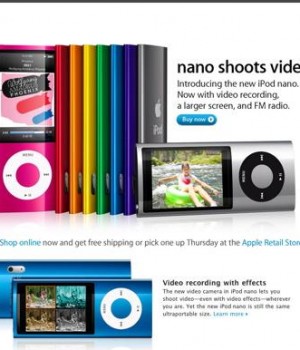 Apple CEO Steve Jobs made his first public appearance since returning from his long medical leave at Apple’s event in San Francisco Wednesday, as he introduced new iPods in the Touch, Nano, Classic and Shuffle categories.

At the event, billed ""It’s Only Rock ‘n Roll," Jobs and other Apple executives announced new features and prices for the products, as well as a new version of iTunes, a newly designed iTunes Store, and increased gaming capability for the iPod Touch, including the first-ever availably of the popular "Madden" football video game.

Highlights of the event:

– The biggest change was to the iPod Nano line. The product has gotten a video camera- the first-ever for an iPod- as well as a speaker and FM radio. Available in multiple colors, the Nano is now priced at $149 and $179 for the 8GB and 16GB versions.

– Jobs announced iTunes 9, a new version of the software which, among other new features, allows users to share music and other items with others in their homes. The iTunes Store has also been redesigned, and the company is now selling ringtones, 30,000 of which are available for $1.29 each.

– Several new games were announced for the iPhone and iPod Touch, including "Madden 10."

– All of the products announced are available starting today.

– Absent from the event: the company’s long-rumored tablet product, as well as any type of refresh for the Apple TV.