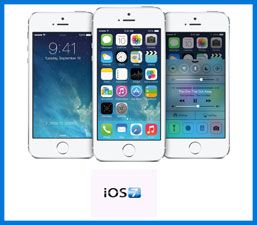 Cupertino, CA—Along with the iPhone 5s and iPhone 5c, which comes in a choice of five trendy colors, Apple released iOS 7. The new operating system, which features a completely redesigned user interface, is available to iPhone, iPad and iPod touch users as a free software update.

“iOS 7 is completely redesigned with an entirely new user interface and over 200 new features, so it’s like getting a brand new device, but one that will still be instantly familiar to our users,” said Craig Federighi, Apple’s senior vice president of Software Engineering. “Next month we’ll be shipping our 700 millionth iOS device, and we’re excited about what our hundreds of thousands of iOS developers are doing to bring great new features to their apps.”

Apple engineered iOS 7 to take advantage of the 64-bit technologies in iPhone 5s, including the native 64-bit kernel, libraries and drivers. All the built-in apps have been reengineered for 64-bit. It also provides integration with the new Touch ID sensor and complements the iSight camera sensor to enable new functions, like automatic image stabilization, burst mode and slo-mo video with 120 fps. Combined with the new Camera App in iOS 7, the iPhone 5s provides up to two times faster autofocus, faster photo capture and better dynamic range.

New Camera app filters add real-time photo effects, a square camera option and the ability to switch between four cameras—video, photo, square and panorama—with one swipe. Plus, the redesigned Photos app introduces Moments, a way to automatically organize photos and videos based on time and location.

With more than 200 new features, iOS 7 for iPhone, iPad and iPod touch includes:
• Control Center, which gives users access to the controls in one place with one swipe from the bottom of the screen
• Notification Center, now available from the Lock screen so users can see all notifications with a swipe, and the Today feature that provides an at-a-glance view of the day with a summary of details such as weather, traffic, meetings and events
• Improved Multitasking that gives users the ability to switch between their apps in a more visual and intuitive way, and iOS 7 pays attention to which apps are used most and automatically keeps content up to date in the background
• AirDrop, a new way to share content with people nearby
• Full-screen browsing with Safari’s redesigned user interface, a smart search field to help simplify searching and a new view for bookmarks and Safari tabs
• A new Find My iPhone Activation Lock, that requires an Apple ID and password before users can turn off Find My iPhone, erase data or reactivate a device after it’s been remotely erased. apple.com