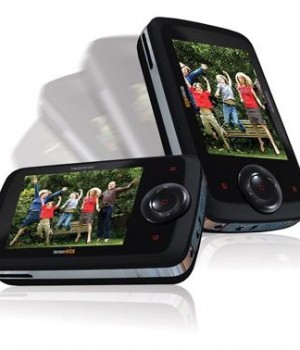 Argraph Corporation and MemoryKick have jointly announced the new MemoryKick Si, the latest update to the MemoryKick device they debuted last year.

The MemoryKick Si is billed as a  photo backup, photo viewer, video player, MP3 player, card reader, and complete portable data backup solution, all in one compact, stylish device. They have increased the capacities and now offer 160, 250, 320, and 500GB.

The Si can transfer any type of files (photos, videos, music, data, etc.) from memory cards, at increased speeds of up to 40MB/s utilizing its proprietary Direct Access File Management System (DA-FMS) technology, enabling it to transfer as much as 2.22 gigabytes per minute.

The MemoryKick Si’s QVGA LCD color screen has also increased in size to 3.5” and a built-in G-sensor automatically orients images for horizontal and vertical viewing.  “With its ability to zoom in and out, create and display slideshows, and view RAW photos and EXIF information, the MemoryKick Si will be every photographer’s indispensable digital assistant,” Argraph said in a released statement.