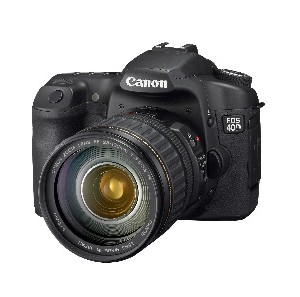 The DSLR market continues to grab the 2007 spotlight and this week it is shinning on Canon as the company announced a bushel full of new cameras (along with a few printers and scanners) with two new DSLRs taking center stage.

The headline act is the new 21.1-megapixel EOS-1Ds Mark III, a high-end DSLR that features a new CMOS imaging sensor (36 x 24mm), 5fps shooting rate with bursts of up to 56 jpegs and 12 RAW format images. Canon explains that the Mark III has incorporated two identical next-generation DIGIC III imaging engines into the camera for parallel signal processing. The CMOS sensor reads out to the dual processors simultaneously in eight channels. The resulting performance is “the best we’ve produced” according to Canon.

Add the usual Canon solid, yet lightweight magnesium alloy frame and Live View shooting mode and the Mark III will surely turn some heads. The Live View has the added advantage of allowing the image to be more easily composed on the camera’s bright 230,000-pixel, three-inch LED screen.  Additionally, Canon tells us, the LCD-viewed image can be magnified by five or ten times in order to ensure that the shot is optimally focused.

The Mark III can also be operated remotely at distances up to 492 feet with the assistance of the optional Wireless File Transmitter WFT-E2A which allows users to view images directly off the camera’s sensor in virtually real-time, and Canon adds, with the ability to adjust many camera settings quickly and easily. Expect an MSRP of $7,999.

The Canon 40D will surely battle the Mark III for industry headlines as Canon has brought an important mid-level DSLR into a product portfolio that includes the wildly popular 20D and 30D models.

The 40D features a newly enhanced, 10.1-megapixel CMOS imaging sensor (designed and manufactured by Canon) and a DIGIC III image processor, along with, Canon tells us, a redesigned autofocus sensor and 6.5 fps continuous shooting capability (for bursts of up to 75 Large/Fine JPEGs or 17 RAW images.

The 40D also features a larger LCD screen (3-inch) with the same 230,000 pixels as the Mark III so this now becomes a much more robust tool for the shooter. The long feature list also includes Live View capability, Self-Cleaning Sensor, software improvements,

Lastly, Canon also announced two new consumer-level scanners – the CanoScan 8800F ($199) and the CanoScan LiDE90 ($79). Both models offer fast, portable and high quality scans to the home user with easy operation also high on the feature list. Check out www.usa.canon.com to find out more about this dizzying array of new products.