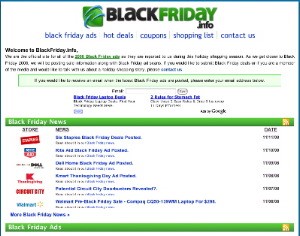 With many of the nation’s retailers taking it on the chin lately, it’s no surprise to see some Black Friday buzz starting a little early this year. Several national retailers have already leaked information around their plans for big discounts on Black Friday to attract “cash-strapped holiday shoppers.”

Sears, for example, recently released a statement saying the company knew its Black Friday specials, which could include deep discounts on home appliances, “are already creating tremendous buzz online” and encouraged consumers to watch for more deals.

Black Friday – which falls on Nov. 28 this year – is one of the busiest shopping days for the nation’s retailers. It also sets the tone for the November-December holiday shopping period, which can account for more than half of merchants’ annual profits and sales. Consumer spending accounts for about two-thirds of the nation’s economy.

Lauren Sosik, a retail analyst out of Connecticut, commented that the leaks she is seeing regarding Black Friday deals indicate one thing to her. “Retailers are nervous about the holiday selling season. They clearly feel this particular Black Friday is an important as a poor start to the season might well indicate a very slow selling season,” she said.

CEA recently released a few Black Friday statistics as well claiming 28 percent of U.S. consumers plan to head out and do some shopping this year on the 28th with over 80 percent of those folks in search of bargains.

The website BlackFriday.com has also already begun their annual revealing of ads, in-store specials and coupons retailers are offering on November 28.