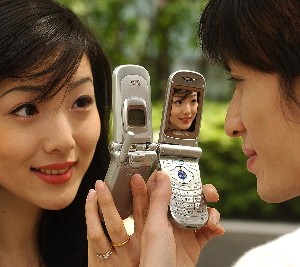 Lots of news recently on the camera phone front and it’s not all about rising pixel counts.

LG Electronics recently signed a deal with German lens maker Jos. Schneider Optische Werke (Schneider-Kreuznach) details of which explained that the two companies will collaborate on optics for the cameras in cell phones.

This partnership is Schneider-Kreuznach’s first with a cell phone manufacturer and comes just after the launch of LG’s “Shine” camera phone. The phone, which was announced in South Korea early last month, contains optics tested and certified by Schneider-Kreuznach. Apparently, a deal was born shortly thereafter.

The two companies actually began working together on the Shine camera phone several months ago and both companies hinted strongly that there are more camera phones from the pair already in the works.

Add to this news the recent announcement from FotoNation that they have made their “Face Tracker” technology available for camera phone manufacturers. Face Tracker is a face detection and tracking technology that detects the presence and position of a subject’s face at up to 30 frames per second during image capture enabling the optimal setting of exposure, focus and color balance. FotoNation demo’d the technology at the recent 6Sight Mobile Imaging Summit in Monteray, Calif., showing how the tech simultaneously tracks up to eight faces on a camera phone.

In addition to aiding in proper focus, exposure and color balance, the demonstration featured automatic image orientation, face cropping, and face thumbnail generation for use in the phone’s contact address book.

FotoNation CEO Eran Steinberg seemed to hint that there is more technology to come on the camera phone front in the future. “This is the first of many new advanced imaging technologies we will be leveraging from our work with digital still cameras into the camera phone market,” said Steinberg.

As competition gets even more intense in the cell phone industry, phone makers are starting to put more emphasis on in-camera features beyond increased megapixels. There are already several models on the market that offer optical zoom and higher quality lenses than the first generation of cam phone offered. You may recall that Picture Business recently did a piece on the Samsung Electronics 10-megapixel camera phone that was released earlier this year in Korea.

All we are left to say is, 2007 should be an interesting year in this category.