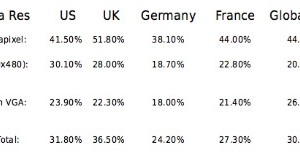 According to a recent report conducted by M-Metrics, camera phone ownership and usage is climbing across the U.S. and Europe and as resolution counts continue to rise, usage habits are changing. Photo messaging in the U.S. has increased 32 percent since February, while in Europe, it has increased 20 percent in France and 16 percent in the United Kingdom, while remaining steady in Germany, where 19 percent of mobile phone subscribers used photo messaging in June.

“At 50.7 percent, the number of mobile subscribers in France, Germany, the United Kingdom and the United States owning camera phones has grown 22 percent since February of this year,” said Mark Donovan, vice president and senior analyst, M-Metrics. “We also see a direct correlation between camera resolution and propensity to use photo messaging, as 44.3 percent of subscribers who own phones with cameras with resolutions exceeding one megapixel sent a photo over the network, versus a global average of 30.5 percent.”