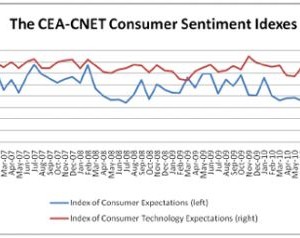 Overall consumer confidence hit its lowest number in the history of the survey, while confidence in the consumer electronics sector was down slightly. That's according to the July numbers released Tuesday by the Consumer Electronics Association and CNET.

The Conference Board's consumer confidence numbers, released Tuesday as well, were also down, going to 50.4 from 54.3 in June.

“The overall mood of consumers continues to be cautious,” Anne Claudio, vice president of research at CBS Interactive, said as part of the announcement. “A variety of factors are weighing heavily on consumers and their feelings towards the economy.”