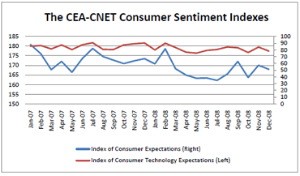 Consumer confidence in the electronics sector dropped in December, according to the monthly CEA-CNET Index of Consumer Technology Expectations. The drop was larger than the one for the economy as a whole.

“Although we have seen consumer confidence dip lower in the past two years, we were hoping that confidence would rebound or at the very least, remain flat during one of the busiest shopping seasons of the year,” CNET’s director of research, Claudia Haase, said as part of the release. “For many retailers, the holiday season is the time when they expect to report an increase in sales, but it appears that economic factors may overshadow the expected boost from the holiday season.”

For more on the numbers, go to www.CEACNETindexes.org