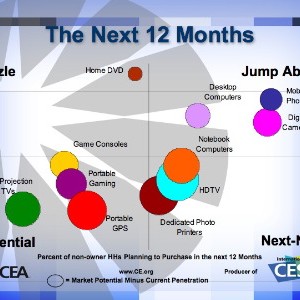 A popular contest held each year at CES tries to identify the one product out of all the thousands with the greatest chance for success. Long before submissions begin flooding in, annual research conducted by the CEA Market Research gives us an idea of the types of products consumers might consider future blockbusters.

In CEA’s 9th Annual Household CE Ownership and Market Potential Study, we not only gauge what consumers own now but what they plan to own in the future. This research reveals two categories of products I find especially interesting. For simplicity, we’ll refer to them as the “next-next” and the “potential.”

Next-next products are those that have a low ownership rate, but a high percentage of homes plan to buy those products in the next 12 months. These are the products that will be best sellers in the next year or two. Potential products are devices showing low penetration and a low percent of households planning to buy the device in the next year. These products could eventually fizzle, but could also move into the next-next category and become tomorrow’s blockbusters.

The future of technology is before us. It is emerging through trends such as high-definition, DIY and portability. These will continue to garner attention and usher in a plethora of new products to serve tomorrow’s consumer.

Shawn DuBravac, CFA,is the economist for the Consumer Electronics Association.