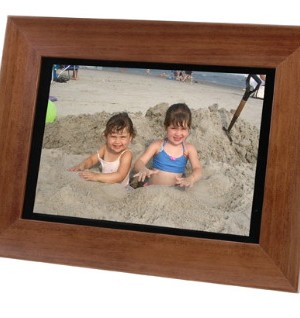 While we had reported that no less than 56 manufacturers displayed some kind of digital frame product at this year’s CES, the numbers will undoubtedly be similar at PMA. We have been most impressed with the bulk of the product we’ve seen emerge within this category with several standouts among that group including Kodak, Philips, Fidelity, MediaStreet, Pacific Digital, Sungale, Sony and Parrot to name but a few.

While these nifty little devices all provide a wonderful way for consumers to display and share their digital images, the folks at SmartParts are bringing something a little different to this market with their latest models. The company has announced two new models to their line here at PMA, 10.4-inch and 8.4-inch frames that both feature pre-loaded software dubbed OptiPix that allows consumers the ability to auto-rotate as well as sharpen images as they transfer them to the frames. A nice and extremely simple addition to a product that already is enjoying quite the surge at retail.

The digital frame market is beginning to take off after several starts and stops over the last few years. It appears as though that generation of digital picture shooters that aren’t printing their images has discovered the product as a great way to make their digital image files more a part of their lives and more actionable – but we think the product has universal appeal as a “digital lifestyle” product for the home as manufacturers are bringing some very attractive models to market of late. We’ll take a closer look at all the new product in this market, as well as a more comprehensive look at the entire PMA 2007 Show floor, in future editions.