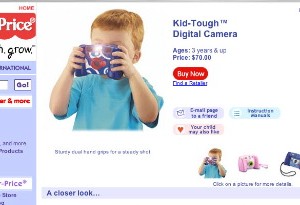 With the toy industry in a bit of a slump over the last few years, you can expect a shift toward the production of higher tech toys in the coming months. As kids are getting more tech-savvy at even younger ages today, the industry has begun a major push toward producing more toys with a decidedly digital edge to them. Toy industry sales fell 4%, to $21 billion in 2005, according to market researcher NPD Group, a drop alarming enough that it has sent many companies scrambling. Traditional categories such as toy cars, dolls, and stuffed animals were all in decline. However, video game sales rose 6% to $10.5 billion. NPD research also claims that more than twice as many kids own portable digital music players and digital cameras this year as last. Cell phone ownership is up by 50%.

“Digital is what these kids know,” began retail analyst Martha Refik. “They have been raised with this technology so there is a comfort level there that no previous generation has enjoyed. The activities that today’s youngsters are involved in are dramatically different than those that the rest of us remember and they generally involve technology.”

And we’re not only talking about the Tween and Teen demographic as toymakers are bringing this new focus on high tech gadgetry into the world of toddlers as well. Look no further than Mattel’s recent release of the Fisher Price Kid Tough Digicam – a $70 digital camera for three-year-olds. The Kid Tough camera has handles on either side, a view finder that accommodates both eyes, 640×480 res, 8MB internal memory and what Mattel tells us is a “drop-resistant” design. Good thing, because the toddler demographic can get fairly rough and tumble we are told.

While the naysayers are claiming this rush to high-tech for young children will see kids spending too much time with gadgets and not enough time in physical and educational activities, the digital camera part of the equation plays nicely into that criticism as digital imaging can be worked in seamlessly with many physical and educational activities. A solid selling point if ever there was one.