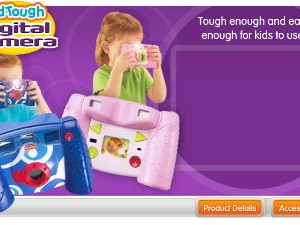 According to the most recent issue of Toy Wishes magazine, the Fisher Price Kid Tough Digital Camera will be one of the hot holiday toys topping tots’ wish lists this season. Toy Wishes “Hot Dozen” list predicts the most popular toys of the year just in time for the yearly ritual of fourth-quarter holiday gift buying.

Not entirely surprising to see a children’s digital camera make the list when you consider we are living in an age of cell phone and iPod-loving children who are far more tech-savvy than the generations before them. Those tracking the toy industry have been claiming that market has been increasingly challenged to make toys relevant to this generation. Over the past three years, as younger kids shunned traditional toys in favor of consumer electronics like MP3 players and portable gaming platforms like Sony’s PSP, toy manufacturers have responded to the threat by infusing more technology into toy production. That trend is apparently gaining steam as we head into 2007. The Kid Tough Digital Camera is a VGA resolution model entirely encased in plastic with over-sized side handles and a binocular-like viewfinder and a well-protected 1.3-inch LCD screen. The camera was designed to be used by 3-year-olds, according to the company, with images stored internally and downloadable to a PC via USB. At $70, this certainly isn’t a cheap kids’ toy.

Not all the toys on the “Hot Dozen” list are tech-based as old standbys Barbie and Monopoly cracked the Top 12. Princess Genevieve, the star of the Barbie doll’s sixth princess movie “Barbie in the 12 Dancing Princesses” from Mattel and a modern-day version of Monopoly from Hasbro called “Monopoly Here & Now” that features some of the most expensive real estate in the country including Times Square and Rodeo Drive.