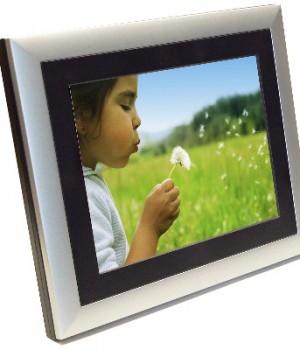 Digital Spectrum Solutions Inc. has announced the new wireless MemoryFrame 8104 Premium , a digital-picture frame capable of sharing content over the Internet and integrates easily with home media servers. It integrates the new multimedia features of Microsoft Windows Vista and fully supports capabilities such as Windows Media Connect and Windows Connect Now. It also fully supports the features and capabilities of Windows XP used in conjunction with Windows Media Player 11. The wireless MemoryFrame 8104 Premium can access and share photos, music and video stored on a PC or network. It can also share photos over the Internet through photo-sharing sites such as Webshots, Flicker, Windows Live Spaces and Digital Spectrum’s “My MemoryFrame” (dsicentral.com/photosharing/). It can also play photos, music and video without a PC or network because it holds up to 800 photos in its internal memory, and also has a built-in multi-format card reader for local playback. The MemoryFrame 8104 Premium features a bright active-matrix 10.4” LCD screen, built-in stereo speakers, a remote control, an automatic slideshow function and an on-screen menu system. Expect an MSRP of $349.99.