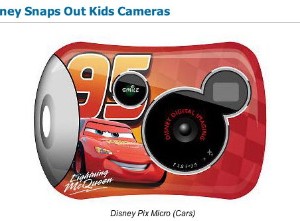 Might not be long before Disney characters like Mickey and Goofy are too busy taking pictures of tourists to pose for pictures with them. You see, Disney has announced they are staking a claim in the digital camera market with new Disney Pix line of digital cameras. The models are designed to appeal to both young tots and teens and apparently will be priced very aggressively. The target market is very clearly not those that are interested in making high quality prints as the models will all be VGA res or lower for now.

The Disney Pix Micro will run on a single AAA battery and be priced at just $19.99; it can snap up to 24 CIF images (352×288) and features an LCD for camera status and image review. Next in the line is the Disney Pix Click that can store up to 200 photos at VGA (640×480) resolution, has 1-inch LCD, a flash, and 2x digital zoom at $49.99. At the “high” end comes the 3MP Pix Max, featuring a 1.5-inch LCD, a 4x digital zoom, a flash, built-in framing feature, and an SD memory card slot at $79.99. All the cameras in the Disney Pix line will come bundled with Disney’s (Windows-only) Pix software for downloading and managing images. A variety of Disney themes are available including Pirates of the Caribbean, Cars, The Little Mermaid, Tinker Bell, and High School Musical.

Disney hinted that they also plan to unveil a $79.99 flash-based 32MB Digital Princess Movie Maker, which records audio and VGA resolution video, and will come bundled with a video-capable version of the aforementioned Pix software.