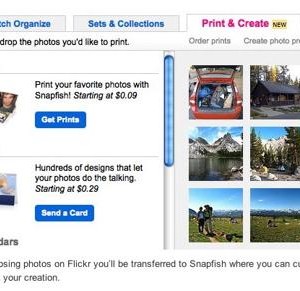 As part of Yahoo!’s commitment, “to be the center of people’s online lives,” Flickr, a division of Yahoo! Inc. and one of the world’s largest photo sharing communities, recently announced it is partnering with Snapfish by HP to provide Flickr members worldwide with a wider range of photo printing and gift creation options.

As Flickr’s preferred printing partner, Snapfish will now enable Flickr members to quickly transfer, organize, and print photos, as well as create unique photo gifts using their existing Flickr photostream. The companies add that this is the first time that most of Flickr’s international members will have an option to print photos directly from their photostream — an advantage of Snapfish’s international presence in 22 countries worldwide.

“With this agreement, Flickr has made easy printing a priority for its more than 40 million members worldwide. Flickr and Snapfish have developed an integrated and intuitive experience that combines Snapfish’s printing capabilities with Flickr’s online photo organization features, such as Organizr, Sets, and Photo Page,” Flickr said in a released statement.

“At Flickr, it’s important that all our members across the globe have the ability to bring their images to life through printing and sharing,” said Douglas Alexander, general manager, Flickr. “We’re excited to partner with Snapfish in this effort, as we feel the company provides the value and choice we know our members expect when it comes to their photos.”

For more information on Flickr’s work with Snapfish, visit the Flickr blog here.