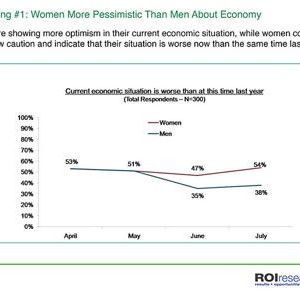 For a majority of women, the glass is still half empty — and for marketers that could be tough to swallow. Even though they have arguably fared better in the recession, women are more pessimistic about the economy than men, according to a survey by Performics, part of Publicis Groupe’s VivaKi Nerve Center.

The trend is interesting, considering unemployment among women is more than two percentage points lower than it is for men, according to the U.S. Bureau of Labor Statistics. Men, by many accounts, have born the brunt of the job cuts.