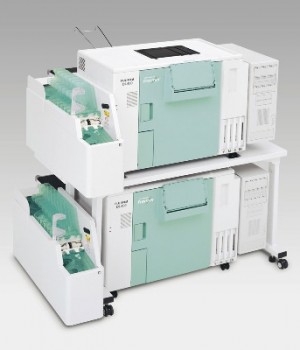 “We have a lot going on in the retail and professional space,” stated Tom Curly, Director of Marketing, Lab Solutions, Imaging Division, Fujifilm U.S.A., at PMA 2008. “Fujifilm Imaging Division is expanding its Frontier Digital Lab solutions, because, as you know, it’s not just about making 4”x6” prints anymore. It’s all about specialty printing now, photo books in particular.”

The company has taken the Xerox Phaser 7760 and built it into the Frontier workflow so its existing customers, those opening new stores and those with Frontier systems already in place, can expand their product offerings. “It’s a lot less about the actual equipment itself and the output it creates than it is about how the products can be made within that Frontier workflow,” explained Curly.

“We showed the equipment (Xerox Phaser 7760 and Xerox DocuColor) here last year at PMA, but we didn’t have the total solution ready to deploy at that time,” noted Curly. “Since then, in the past year, we pulled it all together and we’re now shipping and supporting it—it’s real world.

“For a traditional, Frontier retail lab, we can provide an update to the software—a module or plug-in—that adds photo books to that existing workflow. So if someone walks up to [a retailer’s] kiosk and sticks in their digital media, they can not only order 4”x6”s and 8”x10” photos, they can order everything in the entire catalog that the retailer wants to offer (books, calendars, T-shirts, puzzles, photo blanket, and even a photo dog collar).”

Most of those products are created by a Fujicolor processing facility and will take a couple days to produce.

The books produced using the Frontier/Phaser are quality products. “The whole objective with the Xerox Phaser 7760 is to be able to print on both sides of the paper,” stated Curly. Fujifilm also partnered with Unibind to bind the books and with DigiLabs for the software—the creation side of the book, which is offline, and not part of the Frontier touch screen kiosk workflow. “[The software] is a standard Windows XP or Mac desktop application, which can be sent to the Phaser or DocuColor. It’s not just about the Xerox digital printer,” continues Curly, “it’s about all the different elements that make up the total solution. We supply it all along with the technical support for the retailer.”

There are approximately 15,000 Fuji Frontiers installed in the U.S. and Fuji continues to sell them. However, the company introduced a few new models at the show. “There’s a trend at retail for dry systems,” noted Curly. “So last year we introduced a system called Fujifilm Frontier Lite, for dry retail photo labs. It’s a good solution for the right setting. It uses dye sublimation printers; the same [printers] that are in our Fuji GetPix print stations. It incorporates two Fujifilm ASK-2000 Thermal Photo Printers, and generates 4” x 6” prints in about 4 seconds and 8”x10” prints in approximately 40 seconds, using the ASK-4000 Thermal Photo Printer. A wide variety of other print sizes are also available using these same printers. “Retailers also can attach a film scanner to it to process 35mm film and QuickSnap cameras. It can also adjust orders coming in from an Internet photo solution.

“This year we’ve introduced what we think will be a more important product long term—the Epson/Fujifilm Stylus Pro 7880 wide format printer. It’s a Frontier, but it’s ink jet. It’s going to be quite popular,” predicts Curly. The printer can be integrated with the Frontier Photo Image Controller (PIC) with the new Frontier Workflow Management Software “MS,” which incorporates Fujifilm Image Intelligence®. The printer makes posters and other large format products and can be added to any Fujifilm Frontier system.

“The ink jet prints are not what you’d expect; they’re very sharp and difficult to tell apart from silver halide. Retailers are very interested in this because they can insert them into their existing workflow. This is a commercial printer,” adds Curly. “What makes the quality so high is not just the printing technology, it’s the Image Intelligence technology, which is not just in our printers, but it’s in our cameras (Image Intelligence is a branding umbrella used to describe Fujifilm’s color science). Image Intelligence really makes this product look good. It’s very fast, very clean, and compact,” concludes Curly. “We’re very excited about it.”