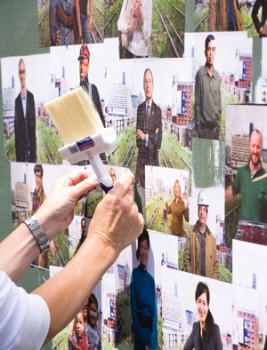 As large format output gets easier and less expensive to do expect to see more projects like the one Fuji is involved in New York City. As the High Line park takes shape above the streets of Manhattan, construction fencing in the neighborhood will feature improvised outdoor art galleries covered with photographs of High Line supporters from the local community and beyond, Friends of the High Line (FHL) recently told us. The group will also launch a Web site featuring the portraits, www.thehighline.org/portraits.

Dubbed “The High Line Portrait Project” and made possible with a $50,000 donation from Fujifilm, the photographs capture the spirit of the inventive new park that is being built atop the High Line elevated rail structure, which runs through the Manhattan neighborhoods of the Meatpacking District, West Chelsea and Clinton/Hell’s Kitchen.

Fujifilm’s contribution to FHL will help support community outreach efforts, including the Portrait Project, in the final year before the Park’s opening. The first section of the Park (Gansevoort to 20th Street) is slated to open to the public in the summer of 2008.

“Set atop an out-of-use freight rail trestle, the High Line will be a park like no other. It shows the creativity and innovation that makes New York City great,” said Robert Hammond, Co-Founder of FHL, a non-profit grassroots organization dedicated to the preservation and reuse of the High Line. “What started as a few people’s dream turned into a community project, gained worldwide support and is finally becoming a reality. The High Line shows what can happen when we dream big.”

Check out this innovative project next time you’re in New York or perhaps during NY’s Photo Plus in mid-October.